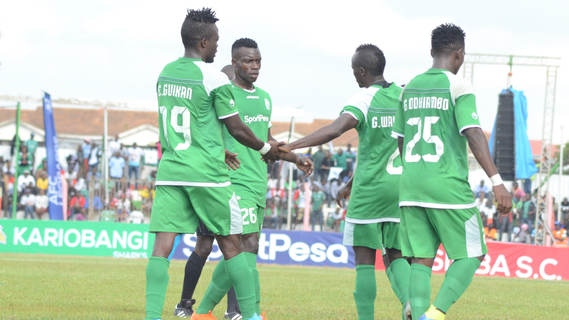 Meddie Kagere’s sublime diving header eight minutes from time capped off a wonderful evening for Gor Mahia as they edged out Zanzibar’s Jeshi La Kujenga Uchumi (JKU) 3-0 in Nakuru on Sunday to progress to the semi-final of the SportPesa Super Cup.

The score would have been bigger had Ephraim Guikan scored a first half penalty, but his blushes were wiped with George Odhiambo and Godfrey Walusimbi scoring in the first half to hand Gor an easy win.

JKU started brightly with Gor taking long to settle and they threatened early with Hussein Suwed Juma’s header from the back post rolling across the face of goal.

Guikan’s chance presented itself in the 20th minute when Odhiambo came down under a challenge from Suleiman Mwinyi Juma inside the box, but the Ivorian forward saw his penalty saved by keeper Mohammed Abdulrahman.

But 10 minutes later, Gor were wheeling away in celebration when Odhiambo unmarked at the far post took his time before slotting past the keeper after being picked out by a cross from Francis Kahata.

The visitors almost drew level two minutes later when Suwed’s volley from the edge of the box off an Edward Mayunga cross went straight to Shabaan Odhoji in Gor’s goal.

But on the turn, Gor took the game into comfortable distance with Walusimbi’s grass cutter of a shot beating the keeper after Cersidy Okeyo started a freekick short to him.

Having gone two up with 10 minutes left before the break, Gor were under minimal pressure and coming off a busy schedule, you could understand their decision to lower the tempo of the game. 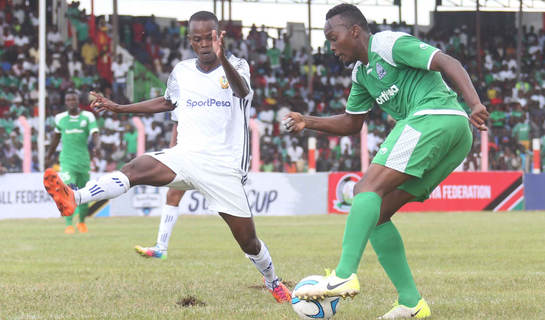 In the second half, coach  Dylan Kerr made changes throwing four subs of the allowed six at once. Philemon Otieno, Kahata, Odhiambo and Walusimbi were rested for Lawrence Juma, Meddie Kagere, Benard Ondiek and Wesley Onguso respectively.

Kagere almost made an immediate impact when he sneaked in to head a Wafula cross from the right but it didn’t have enough power to trouble the keeper.

The Rwandese forward though came up to the fray eight minutes to time when he dived in to head a cross from Ondiek which was delivered with power and pace.