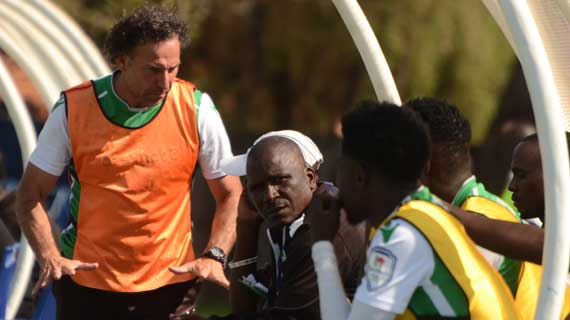 Leaders Gor Mahia dropped points for a second consecutive time after being held to a 0-0 draw by Western Stima in Kisumu on Sunday, but chasing Sofapaka failed to take advantage as they lost a two goal lead to draw 2-2 with Tusker FC in Machakos.

Sofapaka were leading 2-0 with seven minutes left before Boniface Muchiri scored and their former player Rodgers Aloro broke their hearts with a last minute header. Had they won, Sofapaka would have moved to within five points of Gor but the drop in points sees them remain seven points adrift.

With six matches before the season ends, and Gor having one more at hand, odds for Sofapaka challenging for the crown have hugely dropped.

Batoto ba Mungu went into business straight from kick off and were ahead after four minutes when Kasumba headed home his 16th goal of the season off a Titus Achesa freekick. Kasumba had another chance after 16 minutes but he could not get a clean shot at goal off an Elli Asieche pas.

Five minutes later, the Ugandan had another chance when a long throw from George Maelo wasn’t cleared, but his final shot at goal was tame, Emery Mvuyekure gathering easily.

Tusker came close off a quick start on the other end when David Majak headed the ball over an advancing Justin Ndikumana, but Achesa cleared the ball before it crossed over the line.

Sofapaka continued their dominance, but Avire could not shoot into an empty net on the half hour mark after taking too long on the ball when Kasumba beat Emery Mvuyekure to the ball and headed it back to the danger area.

Five minutes to the break Sofapaka had another chance when Avire turned provider setting up Kepha Aswani but the veteran striker could only watch as his strike sailed wide.

Four minutes on the turn Avire had another chance when he found a pocket of space at the edge of the box, went in for a shot but Mvuyekure provided an equally good save stretching all out to his left to turn the ball behind for a corner.

In the second half, Sofapaka needed just three minutes again to go into the lead, this time Magonya running in to the near post and heading past the keeper off an Elly Asieche corner.

But after going down, Tusker responded increasing their tempo. Majak forced a good save from Justin Ndikumana in the 55th minute when the Burundian keeper beautifully tipped the forward’s curling effort behind for a corner.

Sofapaka made changes, Stephen Waruru coming on for Aswani and the striker should have taken the game to comfortable distance for Sofapaka when he beat the offside trap to face the keeper one on one, but instead decided to cut back for Magonya whose shot was blocked.

They were made to pay for that miss seven minutes from time when Muchiri tapped into an empty net after beating the offside trap to connect to a Sammy Mejja cross from the left.

And Muchiri delivered the assist for the devastating goal, curling in the corner that Aloro headed strongly in added time.