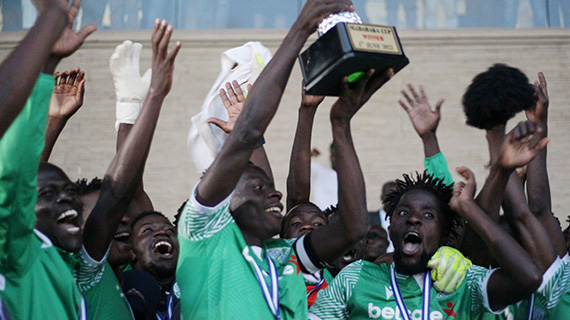 In sudden death however, AFC skipper Peter Thiong’o skied his effort but Odhiambo stepped up for Gor and made no mistake, scoring the winner.

AFC Leopards’ hopes of beating arch rivals Gor Mahia will go on for another year after the latter beat Ingwe 6-5 on post match penalties to clinch the Madaraka Day Cup at the Nyayo National Stadium on Wednesday evening.

AFC Leopards were ripped apart by one of their former players Austin Odhiambo who scored the equalizer that forced the game to penalties and also scored the winning penalty for K’Ogalo. Odhiambo left AFC at the start of the season.

The game was forced to spot kicks after a 1-1 draw in regulation time. Collins Shivachi had given AFC the lead but an error from keeper Levis Opiyo led to Gor’s equalizer. The shot stopper attempted to dribble past Sando Yangayay, but the Congolese won the ball and fed Odhiambo who scored.

On penalties, both teams scored their first five.

In sudden death however, AFC skipper Peter Thiong’o skied his effort but Odhiambo stepped up for Gor and made no mistake, scoring the winner.

For the win, Gor walked home with Sh1mn while AFC Leopards were consoled with Sh500,000.