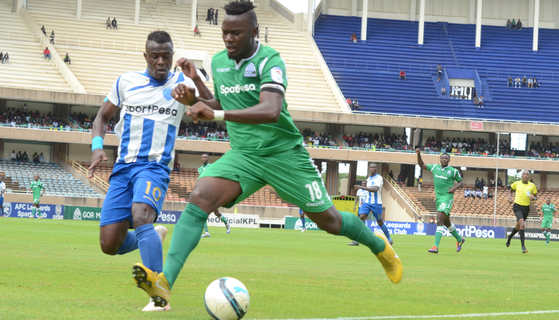 A brace from Nicholas Kipkurui and a third from Jack Tuyisenge saw Gor claim their eight win in nine matches against AFC Leopards, hitting their arch rivals 3-1 in the Mashemeji Derby at the Kasarani Stadium on Sunday evening.

With the victory, Gor have now moved within three points of their record 18th crown and they will be crowned champions on Wednesday in Machakos if they manage maximum points against Vihiga United.

Second placed Bandari also won 3-0 against Zoo Kericho in Mombasa, but the gap between the two remains eight points with three matches left. In a nut shell, Gor just need two points off their last three games to be crowned champions.

Against AFC< Gor showed that they are a class above their fierce rivals who have endured a torrid campaign this year and are placed 10th in the standings.

Ingwe went behind after 23 minutes when Kipkurui pounced on a spilled ball from the keeper to tap home. Keeper Ezekiel Owade spilled a long range shot from Samuel Onyango and Kipkurui reacted fastest to the rebound.

Before the goal, Gor had created the chances with Kipkurui almost making AFC pay after four minutes when he won the ball against Salim Abdallah, but his effort at curling the ball beyond the keeper being futile and the ball flying over.

In the 27th minute, Abdallah once again almost gifted Gor when he was dispossessed of the ball on the left by Tuyisenge but the striker’s aim at goal from a tight angle was blocked for a corner.

AFC’s best chances were off Paul Were’s boots twice. Once, the winger curled a freekick beyond the wall forcing keeper Fredrick Odhiambo to turn it behind for a corner while the second effort was off a shot from range three minutes to half time which went straight to the keeper.

In the second half, AFC started stronger and had a chance when Brian Marita’s freekick split the wall but the Gor keeper parried it away for a corner.

Gor though put the game to bed in five minutes, Kipkurui racing to a through pass from Kenneth Muguna to beat the keeper on 60 minutes before Tuyisenge raced to a loose ball a yard off goal when keeper Owade pushed Kipkurui’s effort against the crossbar.

There was a brief stoppage in the match after the third goal when a section of AFC supports uprooted seats and threw them into the pitch, but after four minutes play resumed. AFC coach Cassa Mbungo made tactical changes, Abdallah going off for Saad Musa.

The change saw captain of the day David Ochieng drop to defense with Saad partnering Said Tsuma in midfield. AFC played better and had their consolation six minutes to time when Vincent Oburu struck home from inside the box after an error from the defense.