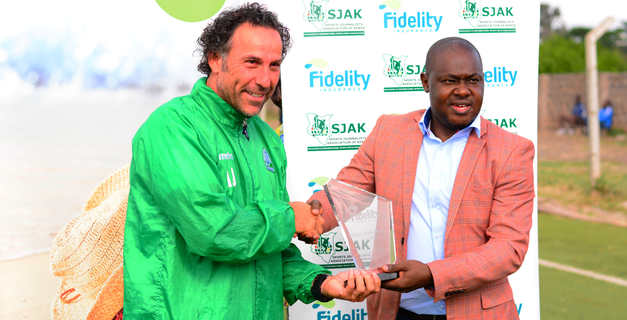 Another accolade for Gor Mahia Coach

Gor Mahia coach Hassan Oktay has made history by becoming the first coach ever to win the Kenyan Premier League Sports Journalists Association of Kenya Fidelity coach of the month award after he was awarded April’s gong on Thursday.

This was a perfect gift for Oktay coming less than 24 hours after he helped Gor Mahia to their 18th Kenyan Premier League title on Wednesday.

Oktay won the award in February and with a stellar performance in April that saw him pick six wins and two draws in eight games, managed a second gong beating AFC Leopards’ Cassa Mbungo and Kakamega Homeboyz’s Nicholas Muyoti while at it.

“This feels as a fair reward for a difficult job. I’m happy for what my team accomplished. We have dropped points against teams sitting lower in the table but for the big games there was no competition. We prepared for the big games then they turn out to be walks in the park,” Oktay said after picking the award.

Gor Mahia launched the month with a hard fought 2-1 win over Nzoia Sugar in Kisumu on 1st of April before beating Sony Sugar 3-2 two days later.

A1-1 draw against Kakamega Homeboyz was followed by a similar score line when they took on Ulinzi Stars. K’Ogalo would then gather themselves and squeeze one past Bandari before they were awarded a walkover against already relegated Mount Kenya United.

They followed up their brilliant campaign with a 2-0 win over Tusker before wrapping the month with a 2-1 win over Ulinzi Stars.