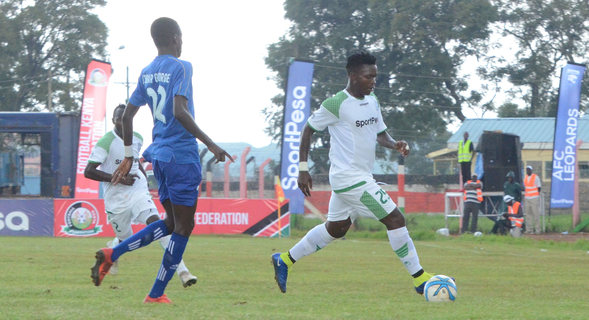 Defending champions Gor Mahia will face Tanzanian champions Simba in the final of the SportPesa Super Cup after they beat Singida 2-0 in the semi-finals on Thursday evening. Meddie Kagere struck in either half to send K’Ogalo to the final and edge closer to a trip to England to face league side Everton in a friendly match next month.

In a match played under tough conditions due to heavy rains, Gor made use of their chances and guard their rear with caution as they won the tie. Coach Dylan Kerr will now face off with his former employers Simba SC in Sunday’s final.

The tactician showed his intent from early on, fielding his strongest team to tackle Singida who beat AFC in the semis on penalties.

They had chances from the onset, first George Odhiambo’s volley from the right going inches wide in the seventh minute while two minutes later, Kagere was presented with a beautiful opportunity off a Francis Kahata pass but he shot wide.

But the pace of the game which had started to become pulsating was hugely punctured when the heavens opened.

Singida came close to the opener in the 25th minute when Danny Lyanga’s shot from range almost caught keeper Shabaan Odhoji off guard, but the custodian managed to react well to punch the effort away.

Having didged the bullet Gor opened the scoring two minutes on the turn. Meddie Kagere sneaked in to flick a corner from Kahata catching keeper Peter Manyika and his defense off guard.

Singida came off the dressing room a better side and they threatened from the first minute, pinning Gor to play on their back feet. In the 58th minute, Ally Kenny’s header unmarked at the back post off a Lubinda Mundia cross from the left went straight to Odhoji.

Mundia turned in to have an attempt on goal two minutes later when he was picked out by a Shafik Batambuze cross but his header sailed over.

Under the difficult playing conditions, both teams resorted to punting balls upfield for a more direct way of attacking.

Gor, who had been pressed into their own half had a chance after 70 minutes when Kahata’s deep cross from the right found Odhiambo at the backpost but his shot was beautifully saved by Manyika.

Singida’s decision to pull out a defender for a striker in an attempt to press for a goal came in to haunt them as from the very same position the defender got off from Meddie Kagere found shooting soace to make it 2-0.