From Seville to Seville, the meteoric world record rise of Moses Kiptanui 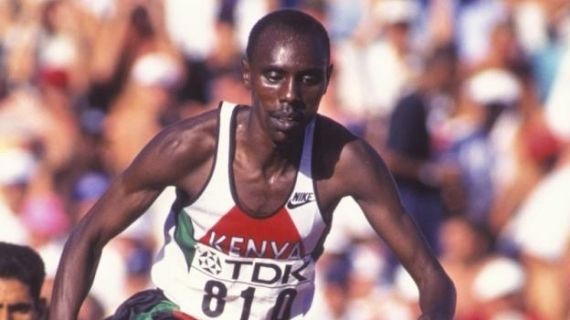 Still, after retiring in 2001, Kiptanui entered the annals of his sport as only the second man in history to set outdoor world records at 3000m, 5000m and the 3000m steeplechase – after fellow Kenyan Henry Rono. He was also the first man to run both sub-eight in the steeplechase and sub-13 in the 5000m.

The Placido Fernandez Varga Memorial indoor meet in Seville on 20 February 1992 was an opportunity for Kiptanui to lay down an early marker in the year of the Barcelona Olympics. It proved to be the first mark that the burgeoning young Kenyan army officer would make on the world record books – and not the last.

Kiptanui had already made a major impression on the international stage. The previous August, a month before his 21st birthday, he had claimed the 3000m steeplechase title at the World Championships in Tokyo.

That year, 1991, had been his debut season over the barriers.

In 1990 Kiptanui struck world U20 gold as a 1500m runner in Plovdiv, making his debut appearance on the European circuit just five days later – in the classic Emsley Carr Mile at Gateshead. The new boy finished seventh in 3:57.70, two places behind New Zealand’s former world record-holder John Walker, in a race won by England’s Commonwealth 1500m champion Peter Elliott (in 3:55.51).

Kiptanui soon shared the same manager and mentor as Elliott: Kim McDonald, a 4:02 miler who had been a long-time rival of Sebastian Coe in their youth together in the northern English county of Yorkshire.

On a flight from Nairobi to London at the start of the 1991 European outdoor season, McDonald told Kiptanui he was not sure he could guarantee him a lane in the 1500m in the Dagens Nyheter Galan meeting in Stockholm. Eager to compete, Kiptanui asked if he could try the steeplechase instead.

A month earlier he had first dipped a toe into the water of the 3000m steeplechase at the Kenyan Armed Forces Championships in Nairobi, winning in 8:31.0. When he arrived in the Swedish capital, the 1500m was full but there was one vacant place in the steeplechase.

It was so ‘last minute’ that Kiptanui’s name was absent from the start list, so the stadium announcer and the media had no idea about the identity of the young Kenyan who proceeded to charge away from the loaded field.

The line-up included reigning Olympic champion Julius Kariuki and two other Kenyans who were to get on the podium at the following year’s Olympic Games in Barcelona: Patrick Sang and William Mutwol. Kiptanui finished four seconds clear in 8:07.89, within striking distance of the world record figures set in the same 1912 Olympic Stadium three years previously by Peter Koech, 8:05.35.

A month later Kiptanui was a clear winner at the Weltklasse meet in Zurich, despite falling on the last lap. Then, at the end of August, he claimed the world title in Tokyo ahead of Sang.

Travelling to the Palacio Municipal de Deportes in Seville in February 1992, Kiptanui had reason to reflect on his meteoric nature rise to global champion status. Eleven months previously he had been an also-ran at the World Indoor Championships in the same arena, finishing fifth in his 3000m heat in 7:53.02 and failing to make the cut for the final.

This time round in the Andalusian capital, Kiptanui proceeded to underline his world-beating pedigree. Passing 1000m in 2:35.72 and 2000m in 5:09.59, he crossed the finish line in 7:37.31 – eight seconds clear of runner up Fermin Cacho, the future Olympic 1500m champion, and, more importantly, comfortably inside the ancient world indoor 3000m record.

Those figures, 7:39.2, dated back 21 years and two days, to 18 February 1973, when the brilliant Belgian Emiel Puttemans blazed round the wooden 190m Deutschlandhalle track in West Berlin en route to a two mile world best time of 8:13.2. Puttemans had been in his prime at the time. During 1972 he took Olympic 10,000m silver behind the Finnish phenomenon Lasse Viren and set world records outdoors at 3000m and 5000m.

For Kiptanui, having followed world outdoor gold with a world indoor record, Olympic greatness appeared to beckon in 1992. Sadly, for him, it was not to be.

At the time of the Kenyan trials in June, Kiptanui was suffering from a knee injury and a strained tendon. He trailed home fourth in a race won by Matthew Birir, the latest protégé of Colm O’Connell, the Irish distance running coach extraordinaire at St Patrick’s High School in Iten, with Sang second and Mutwol third.

“There was nothing I could do about it,” Kiptanui reflected in later years. “I knew there was going to be no gold medal that year, so I decided to break some world records instead.”

On 7 August, Birir led a Kenyan sweep of the medals in Barcelona, ahead of Sang and Mutwol. Four days later, Kiptanui beat all three in a 3000m steeplechase in Monaco, then moved on to Cologne, where he captured the outdoor world record for the flat 3000m – knocking 0.49 off the three-year-old mark set by Morocco’s Said Aouita at the 1989 edition of the same ‘Weltklasse in Koln’ meet on the same Mungersdorfer Stadium track.

Three days after that, Kiptanui had Koech’s steeplechase world record in his sights at the Zurich Weltklasse meeting. He smashed it by 3.27, his 8:02.08 suddenly bringing the prospect of breaching the eight-minute barrier, over the barriers, into the realms of possibility.

It took him a further two years to turn that once-fantastical feat into a reality but Kiptanui got there – after completing a hat-trick of outdoor world titles, with victories in Stuttgart in 1993 and in Gothenburg in 1995, and after breaking Haile Gebrselassie’s 5000m world record with a stunning 12:55.30 run in Rome in June 1995.

In a thrilling display in the final in Gothenburg, Kiptanui had operated at world record pace for much of the race before winning by more than five seconds in 8:04.16. Five days later, he lined up in Zurich determined to break his record – and possibly the eight-minute barrier – by his own means, insisting on the absence of pacemakers.

Passing the opening kilometre in 2:41.3, Kiptanui was slightly down on schedule as he reached 2000m in 5:22.2. At that stage, he still had compatriot Christopher Koskei and Saudi Arabia’s Saad Shaddad Al Asmari, silver and bronze medallists respectively from Gothenburg, in tow. In the final kilometre, however, he moved up a gear.

Digging deep to tear round the final lap in 60.10, he crossed the line in 7:59.18. The modest soul from the Marakwet district had become the Roger Bannister of the 3000m steeplechase.

“I have planned this world record since 1992,” said Kiptanui. “To be the first man under eight minutes is more important for me than winning the gold medal at the World Championships.”

There were to be no more gold medals for the intrepid Kiptanui. He had to settle for silver behind compatriots Joseph Keter at the 1996 Olympics in Atlanta and Wilson Boit Kipketer at the 1997 World Championships in Athens.

Still, after retiring in 2001, Kiptanui entered the annals of his sport as only the second man in history to set outdoor world records at 3000m, 5000m and the 3000m steeplechase – after fellow Kenyan Henry Rono. He was also the first man to run both sub-eight in the steeplechase and sub-13 in the 5000m.

Kiptanui went on to make his name as a coach, taking charge of the Kenyan national team and guiding Ezekiel Kemboi to four successive steeplechase world titles (2009, 2011, 2013, 2015) plus two Olympic golds (2004, 2012). He also became a successful real estate owner and agriculturalist, specialising in milk production in the Rift Valley.

What made Kipketer’s running career all the more remarkable was the fact that he did not start out in the sport until he had left school. “I started running late, not like many others in Kenya,” he told Athletics Weekly in 2018. “I started when I was 19, when I was in the army. I joined the athletics team and then I wanted to make running my job.”

It was Kim McDonald who helped to make running not only Kiptanui’s profession but a burgeoningly successful one.

“I first met Kim when I ran at Gateshead after the World Junior Championships in 1990,” Kiptanui recalled when his manager and mentor died suddenly in 2001, at the tragically young age of only 45.

“I thought he was the owner of McDonald’s!

“Kim changed my life, as well as my journey in athletics. He played a big role in my success as an athlete.”