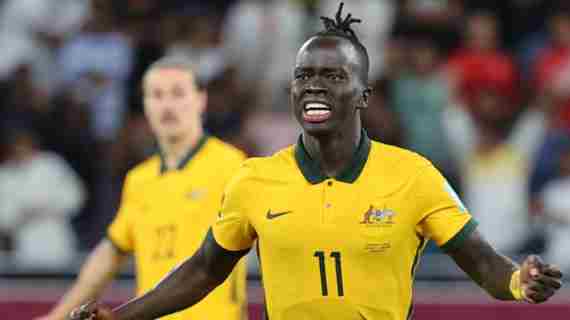 Mabil was born in a refugee camp in Kenya after his parents fled conflict in Sudan, surviving on one meal a day as a child and kicking a ball around to pass the time.

Awer Mabil said his crucial sudden-death penalty for Australia was a thank you to the country that took his family in after they fled Sudan.

The 26-year-old scored Australia's sixth spot-kick in a shootout against Peru before watching goalkeeper Andrew Redmayne heroically save the South Americans' final penalty.

The win in Qatar saw Australia qualify for a fifth straight World Cup and Mabil complete a remarkable journey from a Kenyan refugee camp to football's global showpiece.

"I knew I was going to score. It was the only way to say thank you to Australia on behalf of my family," the winger said.

Mabil was born in a refugee camp in Kenya after his parents fled conflict in Sudan, surviving on one meal a day as a child and kicking a ball around to pass the time.

After being resettled in Australia in 2006, he developed his football enough to join Adelaide United as a teenager and then moved to Denmark's FC Midtjylland.

He is currently on loan to Turkish club Kasimpasa.

"I was born in a hut, a little hut. My hotel room here is definitely bigger than the hut, the room we had as a family in that refugee camp," he said.

"For Australia to take us in and resettle us, it gave me and my siblings and my whole family a chance at life.

Mabil has been a regular for the Socceroos under coach Graham Arnold and said he hoped what he had achieved would inspire other refugees.

"I scored, a lot of my team-mates scored, everybody played a part and maybe that refugee kid played a big part," he said.

"To be a boy who was born in a refugee camp, it was quite a moving moment for our community," he said.

"Just to see him walk out there for the Australian team gives us a good feeling."