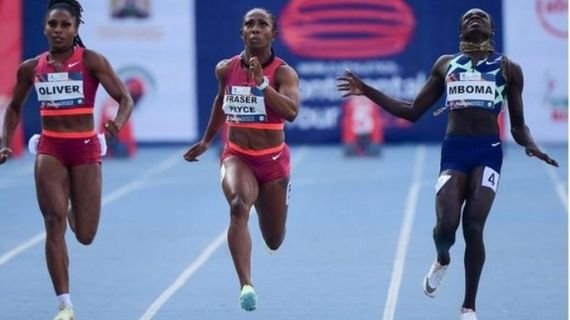 World 100m champion Shelly-Ann Fraser-Pryce, competing in Kenya for the first time in her long and successful career, delighted the thousands of fans as the Kasarani Stadium on Saturday 7 May 2022 with a 10.67 (-0.4m/s) victory in the 100m.

World 100m champion Shelly-Ann Fraser-Pryce, competing in Kenya for the first time in her long and successful career, delighted the thousands of fans as the Kasarani Stadium on Saturday 7 May 2022 with a 10.67 (-0.4m/s) victory in the 100m. Not only was it a meeting record, it was also a Kenyan all-comers’ record and the fastest ever season opener of any 100m sprinter in history.

“It was very good, the atmosphere was fantastic,” said Fraser-Pryce after clocking her third sub-10.7 run within 12 months. “I’m not sure if it was perfect – I’d have to see the replay. But the time tells me that my training has been going great.”

Egypt’s Bassant Hemida set a national record of 11.02 in second. USA’s Shannon Ray was third in 11.33. Olympic 200m silver medallist Christine Mboma had been in contention for a top-three finish but pulled up injured.

Nowicki’s showdown with Pawel Fajdek didn’t quite materialise after the multiple world champion missed his flight to Kenya, but the 33-year-old was still able to produce a world-leading mark of 81.43m without his big domestic rival present. Before today, no man had thrown beyond 80 metres in Kenya; Nowicki achieved it four times.

Three-time Olympic champion and world record-holder Wlodarczyk produced a third-round effort of 78.06m to overtake USA’s Janee Kassanavoid in the women’s hammer. Kassanavoid responded with a lifetime best of 76.82m in the penultimate round, which wasn’t enough to regain the lead, but elevated the 27-year-old to 15th on the world all-time list. Romania’s Bianca Ghelber threw a season’s best of 70.71m for third.

The altitude of Nairobi usually prevents any notably fast times in distance events, but a handful of events appeared almost unaffected as world-leading times were set in the women’s steeplechase, 5000m and both 1500m races.

World indoor bronze medallist Abel Kipsang opened a huge gap on the rest of the field in the second half of the men’s 1500m, breaking away to win in 3:31.01. Up-and-coming runner Raynold Kipkorir set a PB of 3:35.50 in second place.

Norah Jeruto, now running for Kazakhstan, produced the fastest ever steeplechase performance at altitude. The 26-year-old, who ran a world-leading 8:53.65 year, regained her place at the top of the world list with a convincing 9:04.95 victory.

Olympic champion Peruth Chemutai faded on the last lap and was overtaken by Kenya’s little-known Faith Cherotich, who set a PB of 9:12.04 – enough for fourth on the world U20 all-time list. Chemutai finished third in 9:20.07.

Girmawit Gebrzihair, contesting her first 5000m race since earning world U20 bronze in 2018, dominated the race and clocked a PB of 14:49.97 – undoubtedly worth much more at sea level. It’s the 20-year-old’s second world-leading mark of the year, following her 1:04:14 clocking at the Ras Al-Khaimah Half Marathon in February.

In the men’s steeplechase, world and Olympic finalist Abraham Kibiwott built up a 50-metre lead over Olympic bronze medallist Benjamin Kigen before the final two laps and went on to win comfortably in 8:21.92. Ethiopia’s Samuel Deguna overtook Kigen on the last lap and went on to claim second place in 8:27.40, finishing almost three seconds ahead of Kigen.