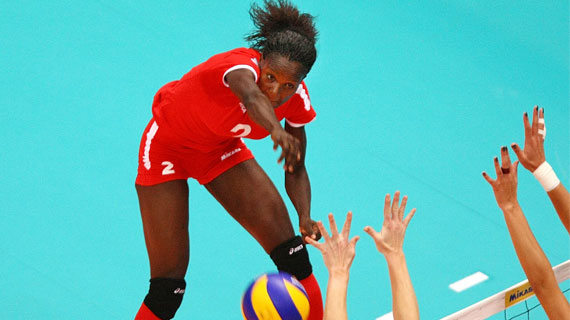 The Kenya Volleyball Federation has confirmed that four foreign based Kenyan internationals will link up with the national women's volleyball squad ahead of their trip to Cameroon for the 2016 Olympics qualifiers.

The Malkia Strikers team is scheduled to depart Nairobi on 10th February  for Cameroon ahead of the Qualifiers to be held between 10th -19th February 2016.

The four players are France based trio of  Evelyne Makuto , Jane Wacu and Esther Wangeci and Finland based attacker Mercy Moim .

" We have sent out letters requesting the clubs to release the players for the qualifiers and we expect the players in camp on the 1st of February." Confirmed KVF's Evans Wasike.

The arrival of the four players is expected to boost the morale and lethal prowess of the squad that eyes Olympics qualification after missing out in 2012.

The team  has been training at the Safaricom Indoor Arena Kasarani since early December  2015 under coach Japheth Munala optimistic of booking the  one spot for Rio. Only one team  will qualify  at the qualifiers with the second best team expected to play in a playoffs against a yet to be determined team from a different region.

In their last attempt in 2012, Kenya was knocked out in the qualifying finals by Algeria  in the tournament hosted in Algeria.  The team however failed to travel for the playoffs.

Currently  18 Players  are in training but this is expected to be trimmed to 14 players  who will make the trip to Cameroon.

The National Olympics Committee withdrew the men's Volleyball team from the qualifiers citing lack of funds.