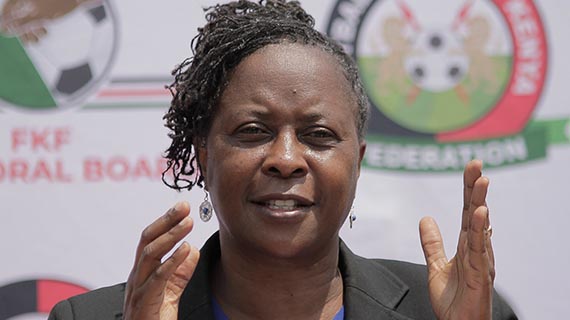 Kentice Tikolo, the FKF Electoral Board chairperson on Tuesday August 11.

The much awaited Football Kenya Federation elections has been scheduled for October 17, the electoral board announced on Tuesday. The national election will be preceded by County polls on September 19 across all the 47 districts in the republic.

The polls were previously in November 2019 but the Sports Disputes Tribunal annulled the outcome. In March, the exercise aborted after the SDT questioned the FKF electoral guidelines. Following the leadership impasse, FKF Electoral Board led by Kentice Tikolo unveiled a roadmap sanctioned by the world football governing body FIFA.

In the event that there are any electoral disputes emerging from the national event, the board will hear petitions between October 19 and 21. Any further plea will be heard by the Appeals Committee on October 22 and 23. Repeat voting in the Counties occasioned by ties will be held between September 24 and 30.

According to the roadmap, contestants who’d submitted their candidature for the second repeat polls early in the year for position in both national and branch levels do not need to repeat the process. However, doors are still open for any interested candidates who want to offer themselves for election.

The voter register will remain unchanged since no football activity has taken place since the last election due to the coronavirus pandemic.

Tikolo belittled warnings by a number of FKF presidential aspirants cautioning her not to release the roadmap to the elections without consulting football stakeholders.

She said: “Football is a members’ club and FIFA is aware of this exercise. I have not received any letter from a member asking me not to proceed to hold elections.”

Meanwhile, Tikolo insisted that the elections will observe all state-sanctioned public health regulations and protocols.