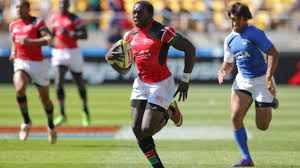 Kenya Rugby Union Technical Director and Shujaa boss Paul Feeney has made five changes to the squad that heads out to the Los Angeles and Vancouver legs of the World Sevens Series, changes that have seen the return of Oscar Ouma and Sammy Oliech after the two missed the entire 2019 season.

“I have been here for only a short time but I have had all about Sammy and Oscar. Of course I want to see them in action as this is an Olympic year and we want to have as many options as possible. We would have had Sammy from early on but he suffered an injury that kept him out,” Feeney explained.

“I have been impressed with what they have done in training and now let’s see them in a game. They bring in different qualities which will make the team stronger,” the New Zealander further noted.

Also coming into the squad is Jacob Ojee and Daniel Sikuta who both missed the Hamilton and Sydney rounds while Oscar Dennis also earns a slot back after recovering from a fracture.

With no injury concerns, the rest of the players who have been dropped from the team is purely because of rest and recovery.

Bush Mwale, youngster Geoffrey Okwach, Herman Humwa, Johnstone Olindi and Nelson Oyoo will be given a rest for the next two rounds of the series.

Meanwhile, the coach has admitted there is a lot of competition in the team especially with everyone eyeing a place in the Olympics.

“To be honest it is tough because everyone wants to be in the team, everyone wants to work hard but at the end of the day we only need to have 12 or 13 for a tournament. It is a good problem for me and Bling (Kevin Wambua) because it keeps everyone on their feet,” further noted.

For the Los Angeles Sevens, Shujaa have been pooled with South Africa, Ireland and Canada and with the tournament reverting to the old format, the tactician is confident they can get to the Main Cup quarters.