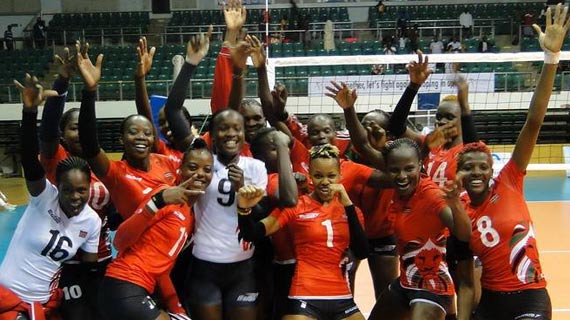 There is reprieve in the Kenya volleyball circles  following communication from the FIVB  indicating that they are willing to support Kenya honor their Olympic qualifiers Playoffs in Puerto Rico in May .

The Kenya Volleyball Federation had announced and also communicated to FIVB  that they will not be able to send a team to the tournament  due to lack of funds.KVF needed to  raise over 10 Million shillings for the trip to Puerto Rico.

Kenya failed to earn the direct ticket to Rio De Jenairo games in August after losing to Egypt  in the semi finals of the African qualifiers held in Cameroon in February. Host nation Cameroon went ahead and won the ticket after defeating Egypt in the finals .

In their response to Kenya Volleyball Federation intentions to withdraw from the qualifiers, FIVB  acknowledged  that , "Last year your Women’s team was able to win for the first time in history the WGP Group 3. Which shows that your Federation is developing the sport."

"We understand your point and the issue of the financial situation, which causes you to withdraw from this event. However we could give you the following option:  The arrival day for the WWOQT (in Puerto Rico), will be 17th May. We discussed with our travel agency and we can prepare a combined air ticket. Your team would first travel to Puerto Rico, then they will continue afterwards to Argentina for the WGP preliminary round."

The World Grand Prix matches will be held in Tucuman Argentina between 3-5 June.

FIVB further offered  to request  the Argentina Volleyball Federation to host Kenya  for a training camp (in Argentina) in the week between the WWQOT and the start of the WGP  between June 3rd and 5th.

In an interview with michezoafrika.com on Wednesday , KVF Chairman Waithaka Kioni confirmed that Kenya will be taking part in the Olympic qualifier action. The Federation will however need to raise close to 2 Million shillings to cover the difference in price of the ticket for making the stop in Puerto Rico.