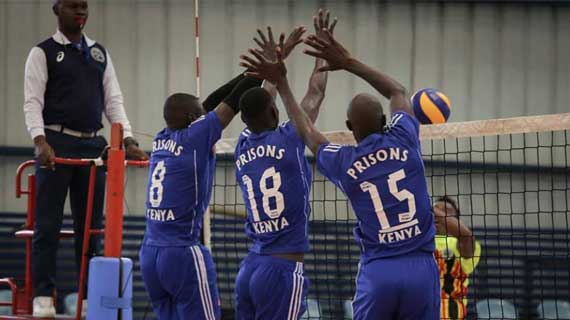 Prisons beat Ethiopia's Wolaita in straight sets of 25-14, 25-20 and 25-23 to keep their hopes of making it to the quarters and vying for the title alive.

GSU blew their one set lead  as they fell to Libyan side Asaria in a five set thriller.

Despite romping to 23-25 first set win , GSU found themselves chasing the game as they allowed the Northerners back with a 25-20 second set triumph.

In what looked like a give and take game pattern, GSU who are coached by Gideon Tarus bagged the third set, bringing down Asaria 17-25. Then the side from Libya leveled set scores again to 2-2 with a closely fought fourth period ending 27-25.

Speaking after the win in Cairo, Prison head coach David Lung'aho noted that ," The win for us is a big boost as it gives the players confidence to attack in the next match. It is a difficult tournament  but the win  has  injected the right momentum and we hope to keep pushing   in order to achieve our desired goal." Lung'aho noted.

Below is a video of the opening ceremony at the Ahly Hall in Cairo.