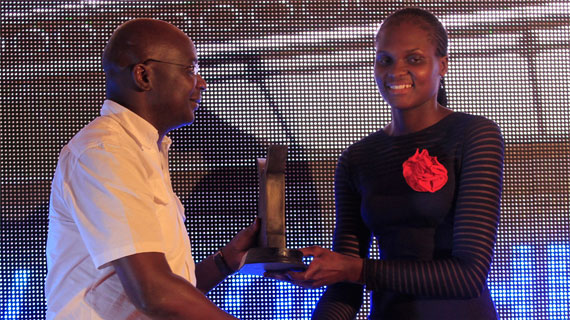 Wisa beat a strong field of four to be named the best player from the region during the annual awards held at the Tourist Hotel Bungoma on 23rd December 2017.

The former Lugulu Girls High School student had an amazing season as she stamped her authority, as one of the finest rising stars of African volleyball.

During the African cup of Nations held in Cameroon earlier in the year , Wisa was instrumental in supporting Kenya’s women volleyball team  qualify to the World Championships to be held in 2018 in Japan .

Kenya Ports Authority Basketball team star Natalie Akinyi emerged as the best female basketball player of the season. It has been a steady rise for the former Bulimbo Girls player who joined the U18 national team straight from high school. Natalie is the current East Africa Most Valuable player and best Point guard.

On top of that, Natalie received a special mention at the Africa Women’s Club Championships in Luanda Angola where she guided Kenya with her spectacular performance. Since 2014 Natalie has never missed a national team call up and remains as one of the finest players in Africa.

George Nyambua was named the best rugby player of the year following an incredible season as one of the most outstanding players in the 2016/2017 Kenya Cup season. Nyambua helped  Kabras Sugar reach the Kenya Cup final and also captained Kenya Simbas in a test against Hong Kong. He also made the writer’s Kenya Cup team of the season.

MMA 2017 Most Promising Basketball player of the year Daisy Ayodi