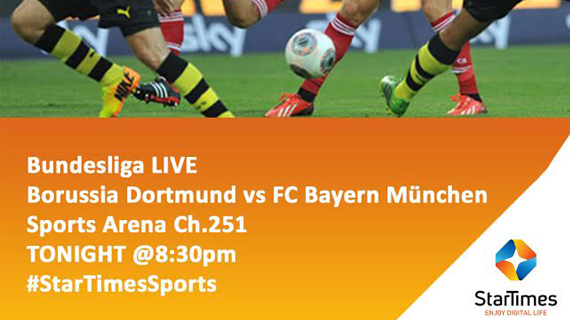 Bayern Munich, you’ve been warned. German football can be brutal. Though you’ve been on a marauding charge this season, annihilating opponents with vicious precision, if midweek’s capitulation at the hands of FSV Mainz 05 is anything to go by, don’t expect your history to come to the rescue. Signal Iduna Park may end up being unforgiving.

Borussia Dortmund welcome the champions on the back of six victories in seven league matches, losing none. The Black and Yellows may have been on the receiving end of Bavarians in recent seaons, but the Rhine-based club will be smelling blood and going for the jugular, given the point deficit is now down to five.

Thomas Tuchel will expect Westfalenstadion to believe. His side may not be oozing with individual class of Munich, but he has a team brimming with collective quality. He just needs the likes of Gabonese hitman, Pierre-Emerick Aubameyang, Marco Reus, Armenian playmaker Henrikh Mikhtaryan and Shinji Kagawa to get it right. If they do, BVB may leave unscathed.

It’s just that, this is Bayern. Though the 24-time record Bundesliga holders have been experiencing a lull in form as the season ends, since Josep Guardiola took over, they’ve still managed to beat BVB in each of their last three league affairs, losing only one in the last seven meet ups. In addition, the last time these teams met earlier in the season, Dortmund were thrashed 5-1.

Robert Lewandowski, he who was a darling in Dortmund colors, is already the top scorer with 23 goals, Thomas Muller not so far off in third. The Black and Yellows will have to ensure the defense of Lukasz Piszczek, Neven Subotic, Mats Hummels and Marcel Schmeltzer, can cope with the potent forward line of the visitors, with Arjen Robben, Thiago Alcantara and Douglas Costa also providing ammunition.

It won’t be easy. BVB will have to dig in deeper to get the desired result.

You can catch all Bundesliga , Serie A and Ligue 1 action on StarTimes Sports