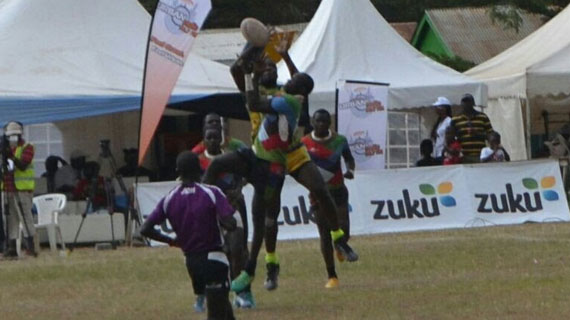 Menengai Cream Homeboyz posted a comprehensive 48-5 blitz of Kenya Harlequin as they won the fourth round of the National Sevens Series, the Dala Sevens at the RFUEA Ground on Sunday.

The deejays showed intent from the start, Alvin Otieno offloading to Charles Omondi for the opening try, Mike Wanjala converting for a 7-0 lead before Bush Mwale added a second. Leonard  Mugaisi with the conversion.

It was route one from the deejays, Omondi powering his way over the chalk for his brace, 19-0 as Quins barely got a whiff of possession.

Cyprian Kuto’s converted try out Homeboyz 26-0 up before Kevin Keegan danced his way to the tryline, touching  down for Quins, the scores 26-5 at the interval.

Mugaisi claimed possession from the restart, beating his Quins defenders to score.

Otieno powered past Eric Shikuku to go over and it was soon Max Kang’eri’s turn to join the try fest as the rampant deejays continued to choke the life out of Quins.

Quins’ misery was compounded when Herman Humwa was yellow carded for a high tackle on Mugaisi, Masai converting from the ensuing penalty try.

Elton Isiaho scored and converted after the restart, the Leos going 21-12 up before Jone Kubu touched down for Kabras.  A further converted try took Kabras 24-22 up.

Essau Otieno scored the opening try after Ken Moseti had turned over possession before Peter Kilonzo added two tries in quick succession, Moseti managing a conversion for a 17-0 lead at half time.

Brian Omondi added a converted try after the interval, extending the bankers lead before Lameck Dunde went over for the Sarries.

Jimmy Kilonzo put the icing on KCB’s cake, his converted try confirming the result for the bankers.