Dagoretti, Serani off to flier in School Games 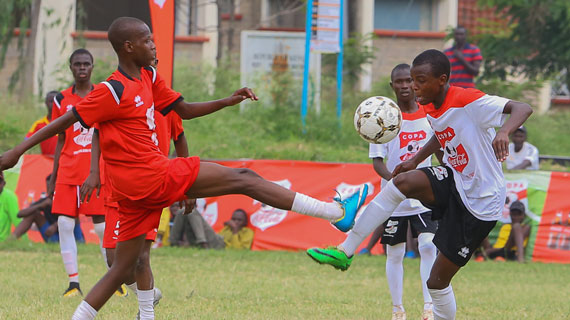 Serani posted a 2-0 victory over Rift Valley’s Goseta, while Dagoretti picked up the biggest victory of the day beating Machakos Boys 4-0, both matches played at the Kisumu Polytechnic.

Serani who have never won the title at both the Under-16 and senior level (U20) were made to work extra hard by a side that eliminated defending champions St. Anthony’s Boys Kitale in the regionals. After a balanced first half, Serani took advantage of a frantic second half start to bury the game.

A poorly taken goalkick by centre back Alex Kibet led to the game’s opening goal five minutes into the second half when the ball fell kindly on Juma Mwinyi who burst into the box before taking a low shot that dipped into the bottom right of the keeper’s zone.

Mohammed Sufii made it 2-0 10 minutes later when Serani turned over possession and hit Goseta on the counter, the striker slamming the ball into the net from the edge of the six yard box.

Goseta had few chances to score and their best came late in the game when Kelvin Wekesa forced a good save off the keeper with a well taken freekick.

In the other Group A match, Koyonzo from Western beat Central’s Gatamaiyu 2-0 with Wellington Andeyi breaking the deadlock with a 22nd minute penalty before Arnold Bukasa added the second 10 minutes into the second half.

In Group B, Dagoretti showed title intentions with a clinical display against Machakos. Baron Ochieng and Dandam Adis gave them a 2-0 halftime lead before Adis added a second in the second and Patrick Kaiser drove the final nail on Machakos’ coffin.

Boys Town from Garissa wowed the fans with their sleek passing moves before edging out Agorosare by a solitary goal tapped home by Abdullahi Hussein in the second half.

In the girls’ category, 2016 champions and last year finalists Wiyeta Girls beat Dagoretti Mixed 3-0 with Jamila Amida scoring twice and Edina Nanda scoring the third. Amida who was by far Wiyeta’s best player broke the deadlock in the second minute with a freekick from range.

She added the second on the quarter hour mark after sidestepping the keeper and slapping into an empty net. Nanda tapped in simply early in the second half to finish off the job. Njambini beat Ugari from Nyanza via the same margin to go joint top of the group.

In Pool B, Nyanza’s Kobala were in destructive mood demolishing Itaara 8-0 while Maeni hit Coast’s Waa Girls 3-2 in an entertaining and competitive tie.