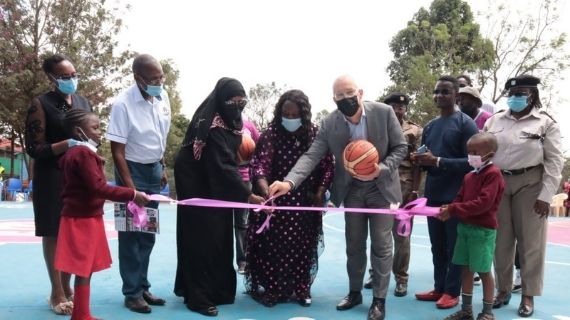 "The Bakee Mtaani project, which is undertaken by Jonathan Jackson Foundation, is one clear demonstration of just how many hearts we can touch and the lives that we can change when we work together," said CS Dr. Amina

The official opening of the court in Riruta

The Cabinet Secretary for Sports, Culture and Heritage Ambassador Dr. Amina Mohamed flagged off the second Basketball court put up by the Jonathan Jackson Foundation (JJF) at Riruta HGM on Friday 26 November 2021.

Launch of the court, under the banner Bakee Mtaani, comes three months after being setoff with groundbreaking by the Director General of Sports Kenya Pius Metto.

"The Bakee Mtaani project, which is undertaken by Jonathan Jackson Foundation, is one clear demonstration of just how many hearts we can touch and the lives that we can change when we work together," said CS Dr. Amina

"I am confident that this court will expose young talents to infinite opportunities and impart them with life skills, grow their interest in the sport, and create a platform for excellence. This is the living link between their now and their tomorrow.

"Further, through projects such as this, I believe we will be able to steer our youth in the informal settlements - many of who have, unfortunately, experienced first-hand the ravages of neglect and substandard living conditions - away from the life of crime and drug abuse and into a life of hope and purpose." added Dr. Amina

On his part, Jonathan Jackson, the owner of Premier League side Nairobi City Stars, said;

"We want to really engage the youth much more. Our main aim is to help the youth grow their talent in the field of basketball especially in the informal settlements,"

"This is what I want to do; to create basketball groups in one community so we can have active tournaments here,"

"It is our hope that in future, off the courts and tournaments, Bakee Mtaani will produce Basketball players of international repute." added Jonathan

A third Bakee Mtaani court is already underway at the BP/Riruta Stadium as is set be launched before the turn of the year.