Congo, Ivory Coast into the semis of CHAN 2016 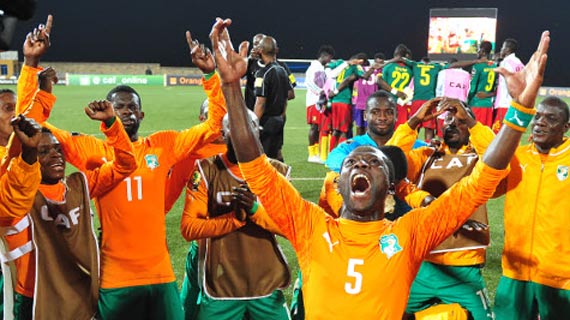 Congo, Ivory Coast into the semis of CHAN 2016

The Democratic Republic of Congo and Cote d’Ivoire overcame Rwanda and Cameroon on Saturday, respectively, to book passage into the semifinals of the ongoing African Nations Championships in Rwanda. Congo, who won the inaugural competition back in 2009 broke Rwandese hearts with a 2-1 victory over the hosts, whereas the Ivorians powered through the Indomitable Lions 3-0 in extra time.

Playing in front of a sold-out and frenetic Amahoro Stadium in Kigali, Congo took a deserved lead in the 11th minute courtesy of Doxa Gikanji to stun the 30,000-seater stadium. The 25-year old Daring Club Motema Pembe midfielder picked up a weak clearance by the Amavubi before hitting a 30-yarder thunderbolt that left keeper Eric Ndayishimiye, rooted on the spot.

Nevertheless, in the 56th minute, Jean Claude Iranzi fed the ball to Ernest Sugira, and the AS Kigali striker struck it past the onrushing Matampi for the equalizer that lifted the Amahoro Stadium’s roof. Rwanda had golden chances to win the game, but would rue them during the extra time in the 110th minute, when Congo defender Padou Bompunga powered his header past Ndayishimiye to silence Amahoro once more.

Elsewhere at the Stade Huye in Butare, after a goalless 90 minutes, Ivory Coast hammered Cameroon with three unanswered goals, to book a date with Mali on Wednesday. Substitute striker, Koffi Davy Mahinde Boua, headed in a corner kick in the 94th minute of extra time, to break the deadlock, before the Elephants’ Atcho Hemann Junior Djobo settled matters 8 minutes later.

In the 112th minute, captain Yao Serge N’Guessan finished off the Lions, as the midfielder hit an incredible shot from near the halfway line to leave Cameroon keeper, Nyame Hugo Patrick, clutching on straws as the loop riffled the net.