Colombia's Montano tips Kenya to succeed if they remain consistent 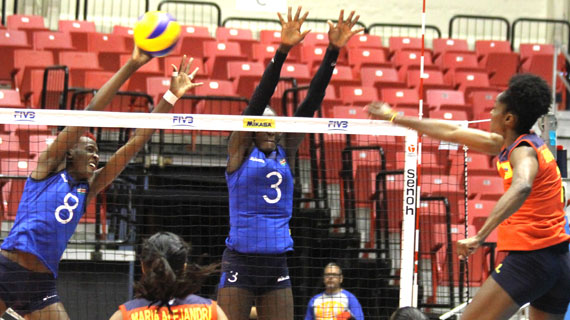 Colombia's Montano tips Kenya to succeed if they remain consistent

Colombia's Montano in action against Kenya

Colombian ace Madelaine Montano has said Kenya is on the right path to world volleyball greatness judging by the level of their passion and energy on the court.

Speaking to michezoafrika.com ahead of their match against Algeria in San Juan Puerto Rico, Montano noted that, “This was my first time to play against Kenya and I must say I was impressed with the level of the energy in the team. They have powerful attacks and they talk a lot on the court which is a good thing.”

In their match against Kenya, the 33-year-old Montano collected 16 points which included three from her rocket jump serves and 12 blocks. Colombia beat Kenya in straight sets but went ahead to lose against host nation Puerto Rico in their second match, a loss she attributed to poor reception.

“Our team is very good in attack but poor with reception. Puerto Rico is a good team that has been playing together for a very long time. They have been consistent in their fielding and they have gained a lot of experience compared to us (Colombia)” She added.

Montano says she started practicing jump serves when she was 15 years old and is still on the learning path, “For me I started doing the jump serves when I was 15 years because my coaches thought I had good power. But at times I feel like I am still far from perfect in my delivery because many times I serve outside the court.” She adds.

For the Kenyan team, she adds that “I think Kenya is on the right path but they must work hard especially on reception. I cannot say we are far from them in terms of resources because we also have a lot of problems in Colombia. We did not prepare well for this tournament as most of us just joined the team two weeks ago from our personal commitments.Kenya just needs to remain consistent and they will get there.” She concluded.

Colombia will play Algeria in their final match and must win with straight sets and hope Kenya beats Puerto Rico in straight sets.