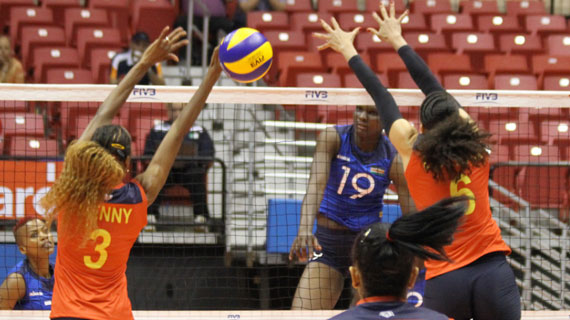 A powerful performance by Colombia dampened Kenya’s hopes of qualifying for the 2016 Rio Olympic games at the FIVB World Olympic qualifiers beating the East African nation 3-0 in the opening match at the Roberto Clemente Coliseum gymnasium in San Juan Puerto Rico.

Four nations – Colombia, Puerto Rico, Kenya and Algeria - are fighting for the remaining one slot to qualify for the Olympic volleyball competition in Rio later in August.

Determined to make their debut appearance at the Olympics, Colombia were quick off the blocks earning their first point from a failed Evelyn Makuto spike.

33-year-old Madelaine Montano was the star of the day for the Colombians earning her team 16 points which included three from her rocket serves and 12 blocks.

Colombia pulled away with an early 4-0 lead in the opening set capitalizing on weak attacks from the Kenya’s forwards to earn quick points for an 8-4 lead at the first technical time out.

They (Colombia) dominated proceedings in all the sets mostly picking points from blocks and powerful service.

The first set ended 25-14, second set 25-15 and third set 25-13 in favour of the day’s winners, a performance that left Kenyan coach David Lung’aho disappointed in his team’s performance, “We had a bad match today against Colombia. We lost easy balls and we were very weak in defence. It is important that we improve our performance in the coming match but as it looks our chance of qualifying for the Olympics is almost gone. For now, the most important thing is to make sure we win against Algeria I our second match and plan from there.”