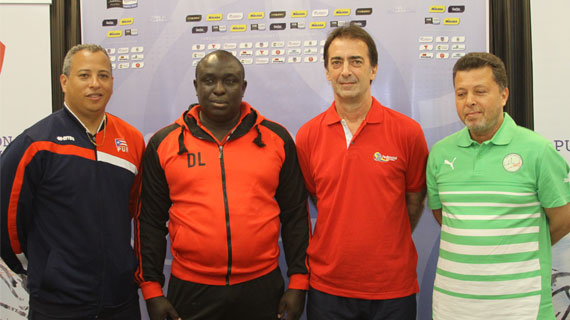 The coaches during the press conference in San Juan

Colombian coach Eduardo Guillaume has warned his players against underrating the Kenyan team.Guillaume was speaking just hours before the two teams face off in the opening match at the FIVB World Olympic qualifiers in San Juan - Puerto Rico.

Speaking to michzoafrika.com, the Argentine has lauded the ever growing standards of the Kenyan team saying, “This is not the same team we played last year during the World Grand Prix. Kenya has achieved tremendous growth in their style of play and there is no room to underestimate their potential.” He said.

“We want to win and qualify for our first Olympics but it is important that we tackle Kenya with caution because we know it is a strong team with amazing players.” He added.

Kenya lost to Colombia 3-0 in their last encounter during the World Group Two Grand Prix in Mexico in 2015.

The match will start at 5:00PM Puerto Rico time.