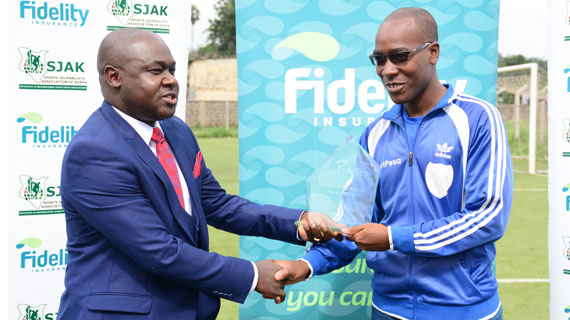 AFC Leopards outgoing coach Dennis Kitambi has been named as the Sports Journalists Association of Kenya coach of the month .

Just a day before he leaves the country for Bangladesh, outgoing AFC Leopards coach Dennis Kitambi received a fitting send-off when he was awarded as the Fidelity Insurance's Sports Journalists Association of Kenya coach of the month for March.

Kitambi led AFC to consecutive wins in his first month in charge and the flawless run of four games handed him favor with the SJAK football committee who voted for him unanimously.

“I am very pleased because this is actually a worthy send off for me. This award comes because of the cooperation I received from the players and other technical bench members and definitely I will share this with them,” Kitambi said as he received the award on Monday.

This is the first time that both the coach and player of the month awards have landed in the same club with striker Ezekiel Odera having bagged the players’ award.

“It is very tough to come in as a new coach and win four consecutive games and as a coach I really feel privileged and this is the memory I will always cherish. We worked hard because I told the players that they have the ability to do well,” the coach added.

As he leaves, he is confident that the club will be in good hands with Argentine Radolfo  Zapata taking charge of his first full training session on Monday morning.