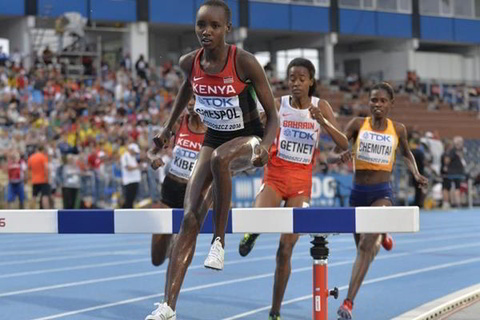 Celliphine Chespol became the first athlete to successfully defend her world U20 title this week breaking the record by clocking 9:12.78 in the 3000m Women Steeplechase in Tampere, Finland

It was another evening in Finland and another smashed record when Kenya's Celliphine Chespol took to the track to participate in the 3000m steeplechase at the ongoing IAAF World U20 Championships at the Tampere Stadium on Friday.

The teenager, staged a stunning display to retain the IAAF U20 title as she smashed the record at the same time. Chespol took a lead by cutting herself some good chunk of space from Kenyan-born Winfred Mutile who was appearing for Bahrain alongside Ugandan Peruth Chemutai.

Chespol went ahead to win the race to add to the increasing Kenyan medal basket which now has four gold medals.

She encountered a strong competitor in Mutile but that was only to last the first 1000m. Chespol shook off her closest opponent at the 2000m mark to go all the way and finish the 3000m steeplechase in a record 9.12.78.

This was the teenager's second victory in the World U20 Championships having won World U18, 2000m steeplechase in Cali, Colombia in 2015. She now becomes the first athlete to successfully defend a World U20 title a feat known only by her, setting up a golden future ahead of her.

Speaking after the race, Chespol, 19, expressed joy and dedicated the medal to her mother back at home.

“It is very special to defend my world under-20 title. I felt the pressure to win and it was a tough race because my rivals were very good but I won the title again, so I’m so happy. I want to dedicate this medal to my mother Beatrice Chespol back at home,” said young Chespol.