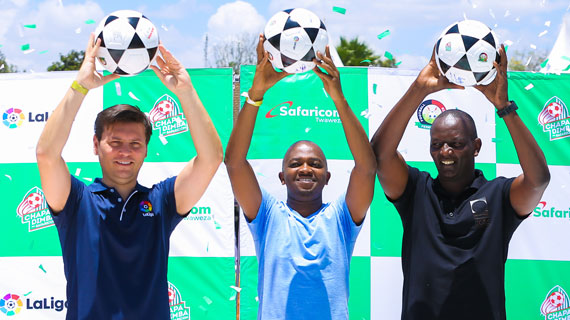 The partnership between Safaricom and LaLiga involves a scouting program that will see certified LaLiga coaches travel to Kenya to search for talented players, both boys and girls, who will make up an all-star team.

“We are very excited to be bringing on board LaLiga to add to the already existing partnership we have with FKF for this second season of Chapa Dimba Na Safaricom. As you know LaLiga is home to some of the best footballers in the world including five time world player of year Lionel Messi, Luis Suarez, Antoine Griezmann and Luka Modric. The all-star team selected will get a chance to attend a 10 day the training camp in Spain and will also play a few friendly games against the world’s best Spanish LaLiga academies”, said Charles Kare, Acting Director, Consumer Business Unit, Safaricom.

Just like the first season the tournament will target talented male and female youth aged between 16 and 20 with an aim of developing grassroots football, scouting for talent and propelling gifted players to the national limelight.

“When we launched the first edition of Chapa Dimba Na Safaricom, we promised to offer young, gifted footballers a platform to showcase their talent. We kept our promise with 13 players from season one getting the chance to join under-20 national team. Several players have also been signed up by the local top leagues for both men and women. We are looking forward to unearthing even more talent in season two”, said Nick Mwendwa, FKF President.

Over 1,500 teams took part in the first season of the tournament whose final was held at the Bukhungu stadium in Kakamega. The launch of the second season was marked with friendly matches involving reigning Champions, Kapenguria Heroes and Plateau Queens who played Nairobi region champions Gor Mahia Youth FC and Beijing Raiders.

“If the talent on show today is anything to go by, then LaLiga certified coaches will be in for a tough time selecting the all-star team that will travel to Spain. We are really excited about this partnership with a leading brand such as Safaricom and we look forward to hosting the young boys and girls who will have been chosen”, said Gregory Bolle, Head of Global Partnerships and Marketing, LaLiga.

Registration for tournament will close on 30th September with group games being played countrywide from October 2018.

The top regional teams will qualify for the national finals where the winners in both the men and women categories will walk away with KES 1 Million.