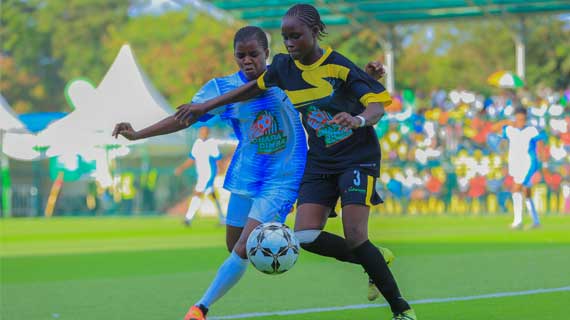 The Chapa Dimba Na Safaricom will this weekend head to the Thika Municipal stadium as top teams search for a chance to travel and play in Spain.

Preparations are complete at Thika Stadium ahead of the Chapa Dimba Na Safaricom Central region finals slated for Saturday 13th and Sunday 14th of April.

The clinics are organized by Blaze by Safaricom and are meant to equip the players with useful life skills including; discipline, teamwork and positively transferable behaviors to propel them into becoming successful players.

“The players have received very useful skills today which will go a long way in making them better players and growing their football careers professionally. We appreciate Blaze for organizing such forums because they are really beneficial to these young players. All the stakeholders are ready and everything is set for tomorrow. May the best team win,” Said Innocent Mutiso, Mentor.

Kiambu teams; Euronuts boys and Limuru Starlets will be looking to defend their titles in the tournament.

Euronuts will take on Irigiro boys from Maragua while Laikipia’s Lufa Graduates will face Nyeri’s Tetu Boys in the boy’s semis. In the girls’ category, Limuru Starlets will take on JYSA from Thika as Barcelona from Laikipia will play Kirinyaga Dynamos.

Winners in both the boys and girls category will receive a cash price of KES 200,000 each and an opportunity to represent the central region in the national finals. The runners-up will also receive KES 100,000 each among other individualized prizes.

Already, Mombasa’s Shimanzi youth and Changamwe ladies, Kajiado’s Al Ahly and Kitale Queens from Rift Valley, Bishop Njenga Girls and Lugari Blue Saints from Western, Manyatta Boys and Ndhiwa Queens from Nyanza as well as Super Solico and St Mary’s Ndovea from Eastern have booked their tickets for the national finals where KES 1,000,000 is at stake.

This year, an all start team will be selected to attend a training camp in Spain during which they will play against local youth sides.

The competition aims at scouting for youth talent, developing grassroots football, and ultimately propel gifted players to the national team