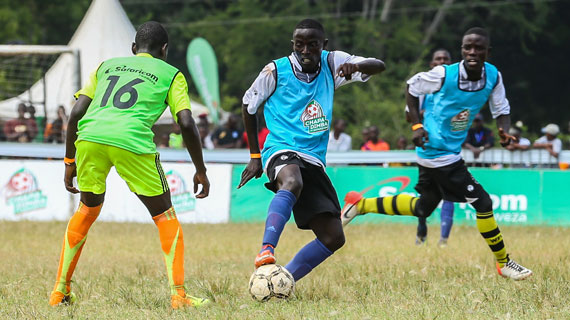 Eight out of the 166 teams that started the journey in December will battle it out to be crowned regional champions.

“This tournament is a valuable platform for nurturing and developing grassroots talent among the youth. So far, three players scouted during the various regional finals have been picked to play for local Premier League Clubs. This is proof enough that we are living up to aim of the tournament which is to develop grassroots football and propel gifted players to the national team,” said Nick Mwendwa, Football Kenya Federation President.

In the boys semifinals, Iqra FC from Tana River will play Breezeham from Malindi while Shimanzi from Mombasa will square it out with Shimba Hills from Kwale County.

In the girls semi-finals, Waa Girls from Kwale will take on St. John’s from Kaloleni while Kilifi Queens will face Solwogidi from Malindi.

The winning teams from Sunday’s final will each receive Shs 200,000 and the opportunity to contest for the ultimate prize in March this year at the grand finale.

“We truly believe in the power of coming together to make the dreams of young upcoming footballers come true. It brings us great joy to be part of a competition that promotes talent and has the potential to change the lives of hundreds of youth in our country,” said Sylvia Mulinge, Director -Consumer Business, Safaricom.

The teams that have qualified for the national final include Rift Valley’s Kapenguria Heroes and Tar Tar Girls as well as Mwingi Junior Academy and Ngakaa Talent Academy from Eastern.

Western, Central and Nairobi regions are also scheduled to hold their regional finals in the next few weeks.