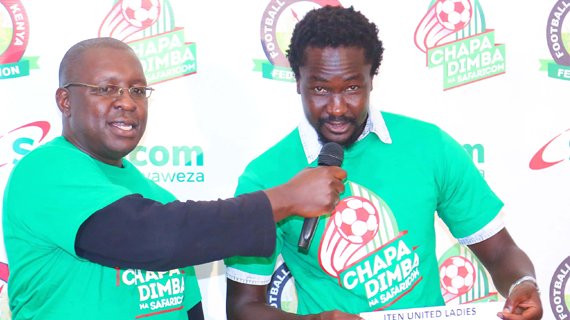 Eight teams will take part in the Eastern region finals of the Chapa Dimba Na Safaricom youth tournament to be held on Saturday and Sunday at Embu stadium.

Over 190 games were played across the region with 140 teams taking part in the matches that kicked off back in September.

“We are grateful to our partners, Safaricom, for facilitating this competition because plenty of talented youth now have a platform to practice and showcase their abilities. We continue to scout for skilled players who we can draft into the national team. We wish all the participating teams well as they prepare to contest for Eastern region supremacy,” said Football Kenya Federation President Nick Mwendwa.

In the girls semifinals Sakuu Queens from Marsabit will take on Karugwa Queens from Meru while Tharaka’s Sildan Soccer Academy will face Ngakaa Talent Academy from Makueni. The Boys semifinals will see Taqwa from Isiolo play Yatte FC from Embu while Mwingi Jnr Academy will square it off with Butiye from Moyale.

The winning teams from Sunday’s final will participate in the grand finale set for March 2018.

“The first regional final in Narok was hotly contested and we are looking forward to giving the best teams in Eastern a chance to also showcase their skills. The winning teams from each regional final will each receive Shs 200,000 each and the opportunity to contest for the ultimate prize in March,” said Sylvia Mulinge, Director -Consumer Business.