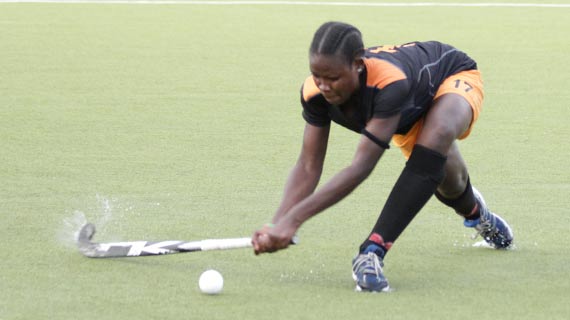 On form international Jackline Mwangi Jow scored a hat trick for the  defending champions. Mwangi who has been on roll on goal hunting mission  and currently is the top scorer with 18 goals in  the Kenya Hockey Union (KHU) national women's league, scored a superb field goal barely four minutes into play.

Police equalized in the 13 minute through Mather Sarfoa with a fantastic  field goal.

Mwangi was again on target in the 34th minute with a field goal to put the national champions in the lead going into the breather.

On resumption, Aggrey Faustina scored  for the West Africans in the  55th minute  through a penalty corner to level the scores 3-3.

Orange will rest on Monday and take on hosts Lusaka Sharks in their second match of the week long event on Tuesday.

Other matches played at the same venue in the ladies category, hosts De Stars Zambia were humiliated 6-0 by  visiting Ghana ladies, as Sharkia of Egypt overwhelmed neighbors Weatherhead of Uganda 9-2.