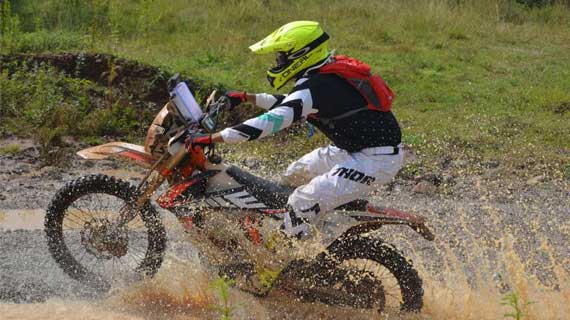 Shivam Vinayak was among the competitors who participated in the Hillclimb in Naivasha over the weekend.

Vinayak, now a dentist, says he will retain his current off-road machine that he will ride along with the new KTM 350 sx-f specifically prepared for motocross.

"Next season I plan to return to motocross. I have a new bike which is on its way and cant wait to start training at the Jamhuri Park circuit! The new bike is expected in a week's time. l will also be doing the rally raids and the hillclimbs on the old bike."

"My new bike is coming from South Africa and should be an exciting ride, thanks to Bike Tyres Kenya for enabling me secure it. The old 2019 KTM 350 will now be for selected events," he said, adding: "Testing will be done locally with the help of Offroad Adventure East Africa."

Vinayak who won the Kenya Motor Sports personality of the year award in 2012, says his Motocross return is informed by his burning ambition to boost Team Kenya fortunes in continental and regional FIM Africa events. Vinayak also wishes to whip up the enthusiasm of the next generation of senior riders in the sport.

"It's always a great pleasure representing the country in Motocross. Sadly the senior category has not quite picked up well and I'm hoping to encourage more riders to take up the challenge. Our longstanding rivalry with Uganda has also added a little zest into the sport and I'm looking forward to it." He said.

Vinayak was among the competitors who participated in the Hillclimb in Naivasha over the weekend.

"The Hillclimb was tricky in the early stages, we had to try and learn the track and terrain in a few heats then try put down one quick time. It was a little rocky which made it challenging on a bike..as the cars passed the soil became loose. The event is always fun because youre competing with everyone to get a better time. Day 1 was about saving seconds, Day 2 looking for half seconds ! Organisation was excellent and the electronic timing system worked really well with live timing updates." Vinayak said.