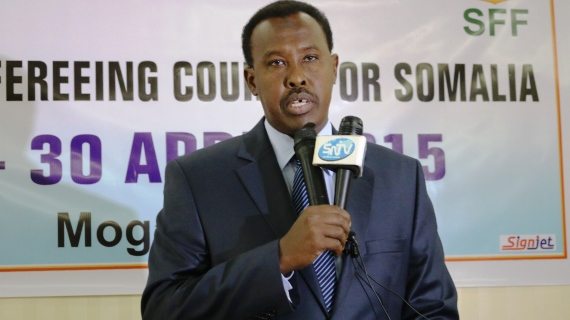 The council of East and Central Africa Football Associations [CECAFA] is pleased with the football progress in Somalia where the first live screened football match went on successfully on Thursday. CECAFA Secretary General, Nicholas Musonye, has written to the  Somali Football Federation President Abdiqani Said Arab  congratulating him on the successful approach in the country.

Thursday’s match was the first to be shown on TV screen live in Somalia’s football history. ‘Congratulations again to SFF for all the timely positive things you are doing in your country. We want to see a changed Somalia and more programs for our youth in our beautiful country” Secretary General, Nicholas Musonye, said in his congratulatory letter on Thursday.

“CECAFA stands with you always in all your efforts. The LIVE coverage is the beginning of greater things in your country, congratulations again” the regional Africa football boss mentioned in his letter. The final match of the 2015 edition of the General Da’ud cup was broadcasted live on the Somali National Television and was facilitated by the privately-owned production company [Horn Connect].