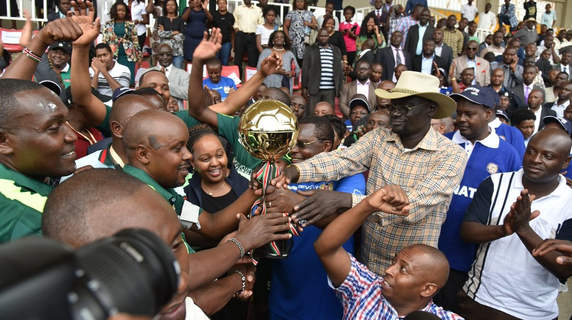 A select team comprised of Members of County Assembly from the 47 Counties in Kenya named County Assembly Forum (CAF) beat Senators by a solitary goal to bag the 2018 Devolution Cup in a lively match played at Kakamega's Bukhungu Stadium on Monday afternoon.

In the fina,  Elgeyo Marakwet senator Kipchumba Murkomen dazzled the crowd with deft moves but could not prevent his side from losing 1-0.Koyonzo Ward MCA Hon. Harrison Shikuku netted the sole goal for CAF.

County Assembly Forum blanked Ugatuzi FC 2-0 to make it to the final while the Senate team romped into the final after a 5-0 thrashing of the Governors team captained by speaker Ken Lusaka. Senator Cleophas Malala was the MVP after bagging a brace against the Governors.Lusaka also had his name on the scoring charts after a well taken strike.

The matches featured 11 players from each team with two halves each lasting 15 minutes.Pupils from Amalemba Primary School accompnied the players as they made it to the pitch.

Besides being a curtain raiser for the fifth Devolution Conference that runs from 23rd to 27th April in Kakamega County, the matches at Bukhungu stadium aimed to champion adolescents and youth agenda.