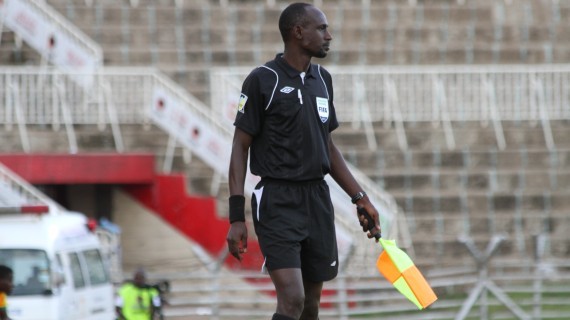 Kenyan referee den Marwa has been banned for llfe by CAF

The Confederation of African Football (CAF) has handed Kenyan referee Aden Marwa a lifetime ban after he was caught on tape receiving a Sh60,000 token from undercover reporters acting as football fans during the African Nations Championship (CHAN) in Morocco in January this year.

The investigative piece done by Ghanaian journalist for BBC focused mostly on West African football but Marwa who had been shortlisted to officiate at the World Cup was caught in the web.

The decision to suspend Marwa for life was reached after a CAF Disciplinary Committee hearing on Saturday. Mwarwa was handed disciplinary measures alongside 21 other match officials but his was the heaviest with the others suspended for between 2 and 10 years.

Jallow Ebrima, a Gambian assistant referee and Yanissou Bobeou from Togo have both been suspended for 10 years. Nonetheless, the decision has raised a few eyebrows as the two did the same thing as Marwa, though their ‘gift’ was 500USD.

There wasn’t much explanation given on why the durations and what findings CAF had after the hearing. Ivory Coast match officials BI Valere Gouho Marius Tan and Coulibaly Abou have been handed the least disciplinary measure, each being suspended for two years.

Eleven other officials have been suspended pending investigations and are expected to appear before the disciplinary board on August 5.

The report was aired just before the World Cup forcing Marwa to resign from travelling to Russia. The sting also forced Ghana FA boss Kwesi Nyantakyi to resign from his post in the GFA as well as losing his seat as the CAF first Vice President, a post that has since been filled by Nigeria’s Pinnick Amaju.