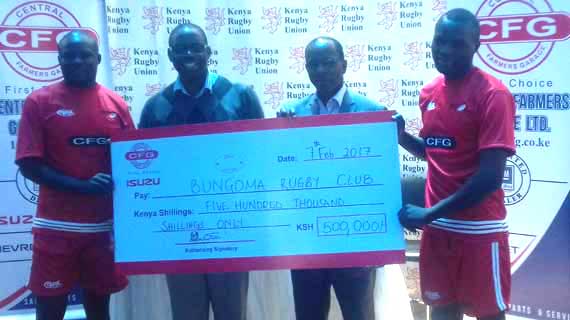 Bungoma Rugby Football Club has today landed half a million shillings worth of sponsorship  from The Central Farmers Garage Limited.

In a statement released on Tuesday morning,  the officials from both sides said the two year deal  is expected to support the growth of the club currently playing in the Kenya Rugby Union Nationwide League.

CFG Sales Manager Gilbert Mutulu noted that , “ We are happy to partner with Bungoma RFC. This sponsorship is geared towards supporting the growth and development of the team as well as at the grassroot level.”

KRU Director of Rugby Thomas Odundo in his remarks, added that , “ This sponsorship plays a big role in complimenting the work of the Kenya Rugby Union in not only growing the game, but also in ensuring that the game is played week in ,week out. “

The deal sees the club receive Ksh 500,000 per year for the next two years. The team also received branded kit as part of the sponsorship.