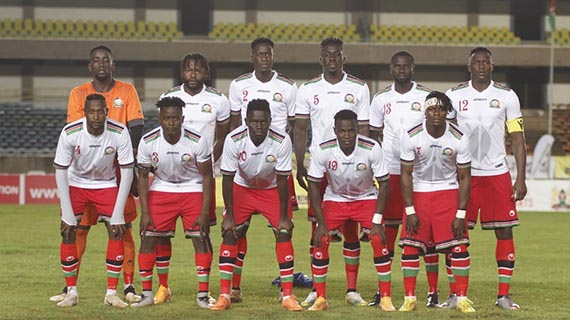 The team is planned to join camp on Thursday but it seems in jeopardy as the federation released statement crying foulds over the governments’ failure to respond to their communique.

Below is the full statement:

Football Kenya Federation wish to announce that the national men’s senior team, Harambee Stars, is scheduled to report to camp on Thursday, November 5th, 2015 for serious preparations ahead of the aforementioned match which will be played at Nyayo National Stadium ,Nairobi on Friday, November 13th 2015 and the return leg away inPraia on Tuesday, November 17th 2015.

FKF has submitted all the plans and budgets thereof to the Ministry of Sports, Culture and The Arts and Sports Kenya to facilitate the Harambee Stars’ smooth preparations for the crucial match, which is the final hurdle to our entry into the Group Stage of the FIFA World Cup™ Russia 2018 Qualifiers.

In this regard, the Federation forwarded the notification of the match and the respective budget for both the home and away legs vide a letter dated October 23rd 2015, addressed to the Principal Secretary, with a copy to the Cabinet Secretary, Chairman and Acting Director General of Sports Kenya. FKF also furnished the ministry with the list of foreign-based players called up in the team and the destinations they will be travelling from to enable the ministry send them tickets in good time.

The team’s training programme were also forwarded to the ministry vide a letter dated October 17th 2015 to enable Sports Kenya plan to accommodate the team for training sessions at the facilities under their watch, namely Nyayo National Stadium and the Safaricom Stadium (Kasarani).

In response to the request for training grounds, FKF received a letter dated 17th September 2015 and October 28th 2015 from Sports Kenya requiring the federation to pay, upfront, 100% of the stadium hire fees; with an attached invoice of KShs. 32,000 and broadcasting fee of KShs. 250,000.

FKF is expressing its concern that the Ministry of Sports, Culture and the Arts and Sports Kenya is yet to respond to any of its correspondence with only three days left before the beginning of the training camp to prepare for the crucial fixture.

Consequently, the Federation is hereby appealing to the government through the line ministry to urgently take up the matter and ensure the team is facilitated and without any hitches or hiccups to prepare for the match.

Due to the complexity of travelling to Cape Verde, the federation has already made travel plans with national carrier, Kenya Airways, which cannot be concluded without making payment and it is therefore concerned that any further delay may lead to last-minute frustrations that can distract the focus of the team.

FKF hereby puts on the record, its profound gratitude to the government for its unwavering support towards the national team and other football programmes, through the Ministry of Sports, Culture and the Arts and we look forward to receiving the full urgent support needed for this important assignment.