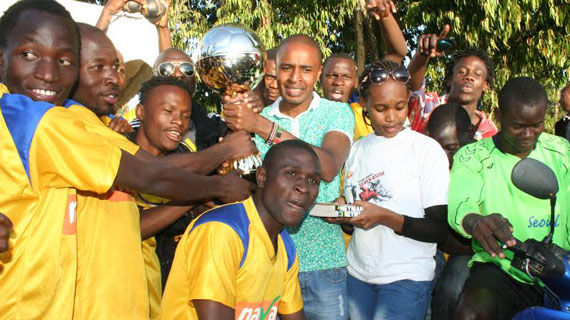 The goalkeeper was also voted as the Most Valuable Player of the tournament by inspiring Production by maintaining a clean sheet and scoring the decisive goal.

The Kibera Laini Saba based Angaza beat  Marren 2-1 through post-match penalties after settling for a barren draw during normal regulation time.

Angaza’s Daniel Odhiambo who was also the top scorer with six goals was picked as the best player of the tournament.

In the semifinals, Marren  pipped Atlas 1-0 as Angaza  blanked Catalans 2-0 to book reach the finals.

The Mtaani soccer tournament that aims to promote cohesion and a forum for players to showcase and maximize their full potential will be an annual tournament.