Bitok calls for early preps ahead of World Championships 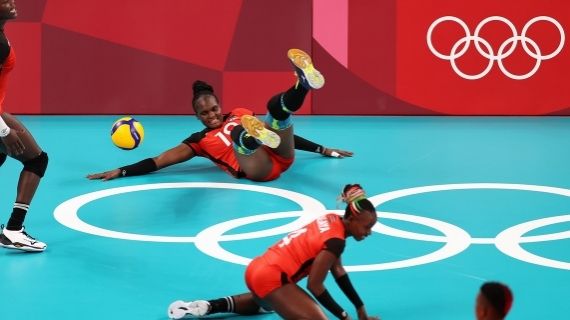 Malkia Strikers in action at the Tokyo Olympics

Malkia Strikers head coach Paul Bitok will be taking on his last assignment as the national women’s team tactician at the FIVB World Championships slated from September 23 in Netherlands and Poland.

The tactician, who will switch gears as he seeks an executive position at the Kenya Volleyball Federation says he wants to sign out in style, by helping the team qualify for the second round of the Championship.

Malkia have been pooled with African rivals Cameroon, Puerto Rico, hosts Netherlands, Belgium and Italy in Pool A and the top four teams in each pool will advance to the second round.

“I want to leave on a high by becoming the first coach to take a team into the second round of the World Championship. I believe it can be done because Cameroon and Puerto Rico are two teams that I believe we can beat,” the tactician told MichezoAfrika.

He added; “I believe it is a very fair pool and we can do well, but we need to get the basics right. We need to start early preparations and also expose our girls to international friendly matches to give them that experience of playing tough matches.”

Bitok says he wants to start training camps with an initial large group of players next month before sizing down the squad to a possible final 12 in the last month preceding the championship.

He has also disclosed that the team might travel to Brazil for a one-month camp and has also said talks are in progress to have another training camp in Serbia where they can play international friendlies.

“I was really hoping we would not be drawn with Serbia because that would then mean that our plans change. We will continue the talks and hopefully they materialize. We really need these high profile matches,” he said.

At the last World Championship staged in Japan in 2018, Kenya narrowly missed out on a second round ticket after finishing fifth in the six-team Pool D.

Their only victory was a straight sets win over bottom side Kazakhstan. They also faced Puerto Rico, and lost by straight sets of 25-20, 25-22 and 25-15, in a match the team felt they should have done better.

In 2010, they finished bottom of their group and faced Puerto Rico again, losing by straight sets.