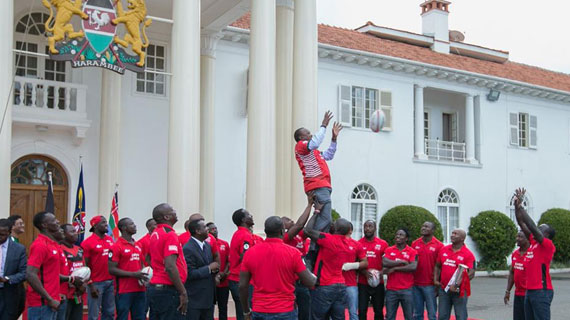 President Uhuru Kenyatta has rewarded the Kenya sevens team with 10 Million shillings as the nation's appreciation for their conquest in Singapore where they beat the world to lift the HSBC Singapore Main Cup title for the first time in History.

The president rewarded the team on Thursday when he hosted the players, technical bench and officials as they paid him a courtesy call at State house.

The president later hosted the players to a meal after exchanging light moments including a line out mock session in memory of his days at St. Mary's where he played rugby.

In his address, President Uhuru thanked the Players and the technical bench for their patriotism, resilience, dedication and hard work that ensured the elusive main Cup sevens world glory came home.

The president assured the Rugby Union and the team that the government will do everything to ensure there is a friendly environment for even better performances in the future.

Kenya beat Fiji 30-07 in the finals in Singapore to win their maiden Main Cup title after 17 years of attempt.

The next leg of the HSBC World rugby series will be in  Paris France and London.

After the final two legs the team will then embark on preparation for the first Rugby 7's Olympic in Rio Brazil in August.