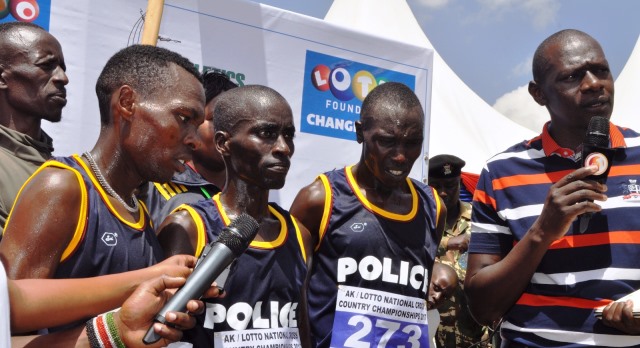 Karoki fresh from winning RAK half marathon finished second with an impressive 29:02.3and Kamworor finished third in 29:03.4.

Barsoton who train in Iten is confident of the title in Kampala.

"I have been competing with the duo and finishing behind them. Today I won and I hope to replicate the same at world stage," He said.

After a tough battle with the elite field, Cheptai tore it into shreds to secure the victory in 31:47.5.

The sprint finish was a replica of the Discovery cross country where Cheptai beat Lilian Kasait again to second in 31:51.9  and  Olympic  1500m queen Faith Chepng'etich also the  2013 World Cross junior champion came in third in 32:12.9.

Kimunyan who has been performing well on the track has this season showed good form on grass. He won the Discovery cross country last month in Eldoret and went ahead to secure a win at the Central Rift regional cross country championships.

"This season I was preparing for the cross country and I am happy that I have made the cut into the team. The remaining part is now to get gold in Kampala," Said  Kimunyan who settled for bronze at the previous world youth event said.

Chepsol beat Chebet at the 2015 world youth championships in Cali in 3000m.

The duo battled Uhuru Gardens in front until the remaining 2km when Chebet outwitted Chepsol for a sprint finish.