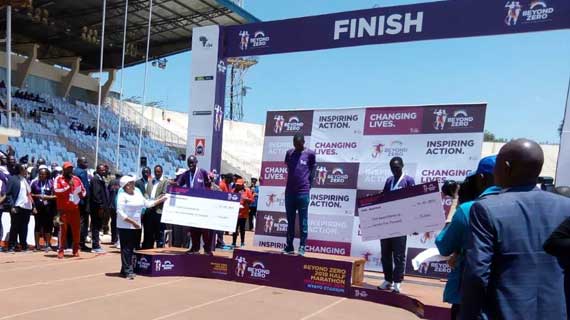 Josephat Bett and Brillian Kipkoech are the winners of the 4th edition of the First Lady’s Margaret Kenyatta’s Beyond Zero Half Marathon held on Sunday, March 10 in Nairobi.

To be crowned King of 2019, Bett weathered tough competition to beat Philemon Rono who also posted 1:01:34 to the second place on a technicality.

The tight competition was also manifested in the third and fourth places as once again Simon Kirui consigned William Wanjiku outside of the podium places on a technicality as they both posted 1:01:40.

Hillary Kipchumba (1:01:44) closed the top five positions. Charles Mneria was a lucky one as he timed 1:01:50 to make it to the cash category.

The 21km winners (male and female) pocketed Sh250,000 each while runners-up took home Sh125,000 as third placed finishers were awarded Sh75,000. Those who finished in the top six were also awarded cash.