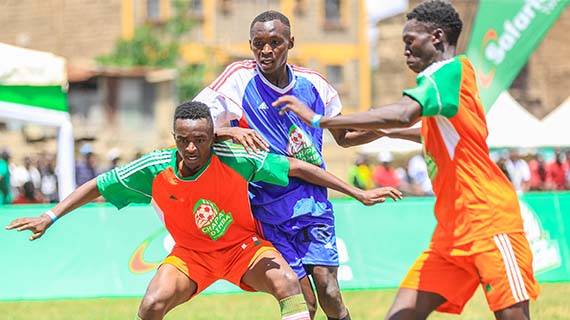 Beijing head coach Mark Okwiri has vowed that his girls will pull all stops to ensure they wrestle back the title, saying he has strengthened his squad to include more versatile and explosive players.

Having relinquished their title to Acakoro Ladies last year, Season One Chapa Dimba na Safaricom Nairobi region champions Beijing Raiders will look to regain their crown when they start their title defense against Westlands’ Kibagare Girls on Saturday at the Jamhuri High School.

Beijing head coach Mark Okwiri has vowed that his girls will pull all stops to ensure they wrestle back the title, saying he has strengthened his squad to include more versatile and explosive players.

“We are prepared for the tournament because this season, I have brought in fresh blood who are hungry for glory. These are young players who I feel have a unique and exciting style of play that will give us the much-deserved win and a chance to represent Nairobi Region at the Nationals,” Okwiri stated.

While Okwiri’s Beijing will hope to get their hands back on the crown, holders Acakoro are out to retain their champions tag and will start their campaign with a tie against St. Anne’s from Makadara.

At the same time, there will be a sure new champion in the boys’ category after holders South B United fell off in the preliminaries. Either of Kasarani’s Brookshine Academy, Makadara’s Hakati Sportiff, Kenya School of Government and national school game finalists Dagoretti High School will clinch the coveted crown.

Brookshine face Harakati in the first semi while KSG tackle Dagoretti in the second.

The winner will not only get a chance of progressing to the national finals but also bag a hefty cash reward of Sh200,000. For individual performers, there will be MVP and top scorers’ trophies to vie for as well as a chance to be scouted into the Chapa Dimba All Star team to Spain.