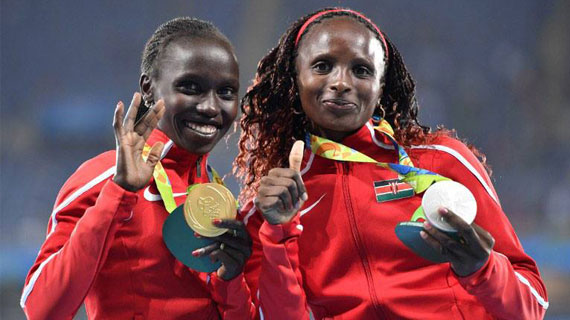 Vivian Cheruiyot and Hellen Obiri at the Olympic games / Photocourtesy

Olympic 5000m gold medalist Vivian Cheruiyot has advised young athletes to pass through the relevant stages in their athletic career to avoid wasting their precious talent.

According to Vivian, junior athletes should not rush into senior competitions in  search for money  but should develop a transition plan to make them relevant when they graduate to senior ranks.

“For consistency and to ensure that one develops his or her talent gradually, you should not hurry in competing in senior races while still a junior even if you are shining on that category. They should stick to their category until they transit to the next level,” said Vivian who won Kenya the first ever women’s Olympic gold in 5000m last year in Rio.

Many junior athletes have established themselves in the cadre but disappeared on the way after jumping into the senior races immediately.

“And we have many of them who started well in junior and youth level but quickly jumped into very competitive races for senior athletes. That is the stage they destroyed their career failing to sparkle upto now. One should come from the youth, then to junior races progressively,” She said.

Vivian herself is the product of the IAAF World Youth Championships which build her to the senior cadre where she is still shining.

At the age of 15, Vivian secured Kenya a bronze medal in 3000m at the inaugural 1999 IAAF World Youth Championships in Poland.

She has won Kenya medals in world championships, Commonwealth Games and Olympics and she is not yet done with her next move being marathon.