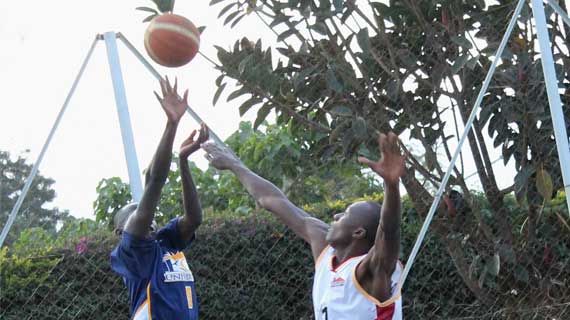 Equity Bank men and women teams are the winners of the annual Tom Munyama basketball tournament held at Upper Hill Secondary School over the weekend.

The women's side bounced back from a 16-point deficit at the breather to beat Zetech University 42-48.

The varsity outfit had taken control in the first quarter with a 14-12 lead and went on to hammer the bankers 21-7 in the second for a 35-19 score-line at the break.

On resumption, Equity resolved to shooting from the distance with Melissa Akinyi slotting in two three pointers, Betty Kananu added one, then three others contributed four baskets and a free throw (18-4).

Having reduced the 16-point gap to two at the end of the third quarter, Equity Hawks built up on that fete in the fourth as they braved past the resilient students.

The Equity men's side had to brave stiff competition from a resurgent TOS in the second half of the finals to run away with the trophy with a 54-56 win.

Kananu was the only one who hit double figures in this finals with 15 points.

The tempo in the fourth quarter went a notch higher, each team leveling to their opponent's challenge but Equity scored 10-14 to win the title by a basket. Faisal Aden scored a game high of 14 points for Equity as Job Byron raked in 13 for the losers.

Equity men's lineup had eliminated Kenya College of Accountancy University and Riara University in the semis and quarterfinals respectively, while the women's outfit saw off United States International University- Africa 67-25 in the semis.