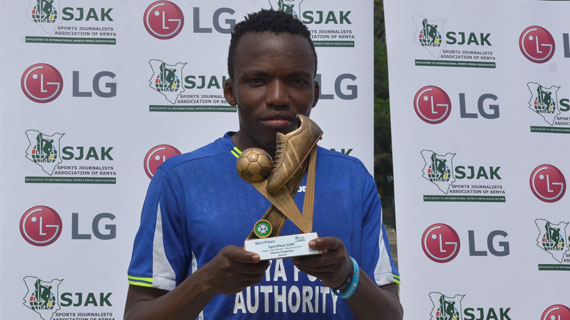 Chetambe, who has since moved to join Bandari, helped Zoo evade relegation by a whisker last season courtesy of his five goals scored within the month to finish two slots above the red line.

The midfielder was in a scintillating form during the month netting five times in nine matches, goals which aided Zoo to bag 15 points out of a possible 27 and hence maintained their top flight status. Zoo registered three wins, four draws and lost twice.

“I am so pleased to win this award. It was a tough month because we were fighting relegation, I am honored that my effort has been recognized today though not with Zoo but now at Bandari,” Chetambe said after receiving the award at the Mbaraki Sports Club in Mombasa.

“I hope to carry on the good performance to Bandari and help the team win titles this season. It is going to be a tough season since we have the CAF Confederation Cup, the league, Super Cup and also defending the Shield. So far I enjoy my stay in Bandari and I promise our fans good results.” he added.

Coming up against players who had equally impressed during the month, Chetambe garnered 19 votes in a poll conducted by the SJAK football commission, two ahead of Tusker winger Boniface Muchiri who emerged second.

Chetambe’s goal scoring instincts paid dividends as Bandari beat a number of interested outfits to secure his signature and consequently made his debut in the recently concluded CECAFA Kagame Cup in Rwanda.

The midfielder is the sixth recipient of the award this season after Kakamega Homeboyz midfielder Peter Thiong’o, Abdalla Hassan (Bandari),Justin Ndikumana(Sofapaka) and former Sofapaka goal poacher Umaru Kasumba who won it twice.