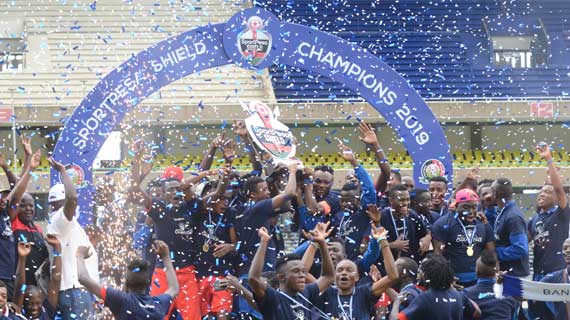 The game was rained off on Saturday evening with Bandari leading 2-1 and was replayed on Sunday morning with the second half only. Bandari defended well and were opportunistic with a 84th minute chance which was guided into the net by Benjamin Mosha.

Congolese import Yema Mwama had scored twice with Sharks drawing one back through Patillah Omotto in the first half on Saturday. This was Bandari’s second domestic title after clinching their maiden one in 2015. Head coach Bernard Mwalala meanwhile won his first ever title as head coach.

“I am really pleased and I can say this is the happiest day of my life. We worked hard as a team and despite the tempo being cut down with the rains yesterday, we managed to hold on and win,” Mwalala said after the game.

On Saturday, Bandari who lost to Sharks in the SportPesa Cup final in Dar es Salaam in February were in for revenge and as early as the second minute, they were ahead. A ball was planted behind the defense and Mwana raced to it before slamming the ball past Gad Mathews in the Sharks goal.

He made it 2-0 after 22 minutes when Abdallah Hassan’s pass from midfield split the defense and the Congolese striker raced to it before shooting low past the keeper.

With the rains opening up, Sharks pulled one back with Omotto striking a superb hit from the edge of the box after Duke Abuya’s effort was poked out of his path before the midfielder picked the ball up.

The second half played on Sunday at 11am was a cagy affair, highly expected because of the dropped tempo from yesterday, chances were few and very far in between. Bandari’s early chance came in the 56th minute when Mwana picked on a poorly defended ball but his volley from the edge of the area went over.

Bandari scored in the 84th minute when Mosha chested the ball into the net after Hassan’s cross was deflected into his path by William Wadri.

Bandari earned themselves Sh2mn from the victory and their sponsors Kenya Ports Authority added on a Sh1mn reward and on top of it have promised them a week-long pre-season training camp in South Africa.