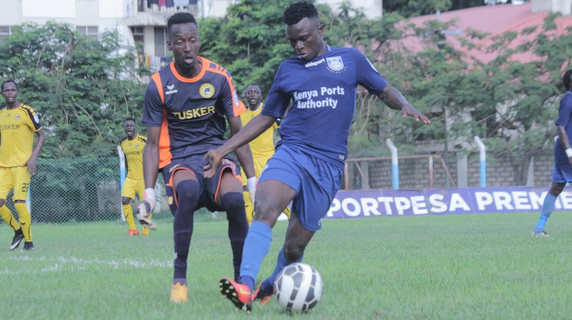 Bandari FC beat Tusker FC 3-1 in Mombasa on Thursday afternoon to move second in the Kenyan Premier League standings and in the process further delaying Gor Mahia’s title party. The victory at their Mbaraki backyard took the dockers to within eight points of the leaders and that means, mathematically Gor cannot be crowned champions yet.

K’Ogalo will now need to wins in the remaining four games to clinch their 18th league title, with Bandari still bearing mathematical chances of toppling them.

The dockers picked up their third successive win and second in three days having beaten Chemelil Sugar 2-0 on Tuesday.

The brewers broke the deadlock in the 22nd minute when Eugene Asike, bearing the captain’s armband, nudged his team ahead after being fastest to react to a rebound when keeper Faruk Shikhalo, facing his former employers spilled a header from David Naftali.

But it took the hosts just 10 minutes to get back on level terms when Shabaan Kenga headed the ball past Emery Mvuyekure when William Wadri picked up a rebounded shot from Hassan.

The dockers doubled their lead just a minute into the second half when keeper Mvuyekure slipped as he tried to control a back pass and a rushing Yema Mwama pounced before slotting the ball home.

Benjamin Mosha then put the icing on the cake on the stroke of full time when he tapped home after the Rwandese keeper had spilled another short from Abdallah.

Bandari are now two points ahead of Sofapaka FC who had held on to the second spot for a long period of time.