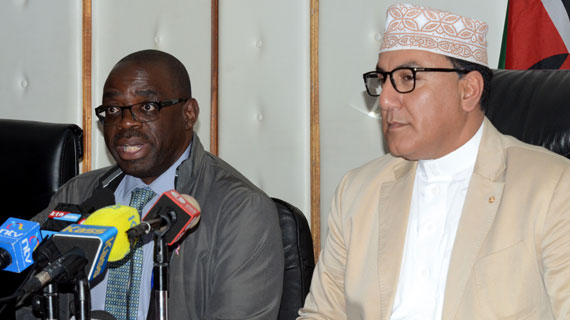 Just a week after announcing in Mombasa that he had instructed Brand Kenya to cancel its sponsorship to the national rugby sevens team, Tourism Cabinet Secretary Najib Balala on Friday afternoon announced he had rescinded the decision.

This is after mediation talks between his ministry and the Kenya Rugby Union mediated by Sports Cabinet Secretary Rashid Echesa.

“We have been meeting as government both the KRU and the Shujaa team. The government is very happy and impressed with the progress the sevens team has had in the last couple of years. Unfortunately the embarrassing situation in Paris put shame to us and this is a serious issue we will not tolerate,” Balala said at his ministry’s headquarters in Nairobi.

Balala announced that a new three-year deal will be negotiated with the Union after the Sevens World Cup in San Francisco. The new deal will see the brand in front of the jersey change from ‘Make it Kenya’ to ‘Magical Kenya’.

“The tourism ministry is committed to use rugby in the next three years to promote Kenya as a destination. Magical Kenya is promoting the destination. It has been accepted internationally that everything you do in Kenya is magical including our Shujaa team,” Balala further explained.

The team will not wear the brand in front of their jerseys at the World Cup as it is against World Rugby regulations. However, they can wear branded shirts for training.

Meanwhile, KRU CEO Ronald Bukusi delivered a written apology on behalf of the players and the union after the Paris Fiasco.

“We have put in place proper structures to ensure grievances are resolved amicably without tainting the image of our country. We commit to ensure that as brand ambassadors we will position Kenya as a globally transformative and competitive nation,” Bukusi mentioned in the statement.