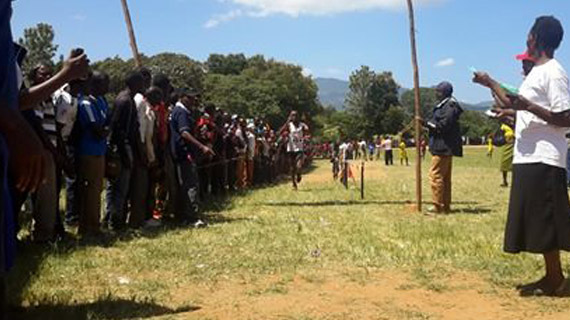 Kyeva who trains at the Machakos Athletics camp used the gruelling course and stiff challenge mounted by his training mate Michael Mutisya to prepare for Buriram marathon set for February 12, 2017 in Thailand.

Kyeva was only seven minutes shy of his personal best (PB) of 28:48 in the 10km distance when he posted 35.27 in the challenging course ran under scorching Sun to finish ahead of Mutisya who crossed the chalk three seconds later in 35:40.

"I have a race in Asia in February and Kalamba couldn’t have come at a better time for me because this is part of my preparation. I didn't post a good time in my last race which was under a hot condition, just like here but am looking forward for better time," said Kyeva.

In the women’s race, Mutile, a student at Riruta Central who is looking forward to her first international race next year where she is looking forward to make her debut for Bahrain in the world cross country in Kampala, Uganda had no competition but the weather to fight against when she kicked in after just 15 minutes and her surge saw her cross the line three minutes ahead of her closest challenger.

"I am looking forward for next year to come and defend my title. The weather wasn't a big challenge for me because I come from within but the course was challenging and I believe it will be even tougher next year so I'll have to put in a lot of effort in training," said Mutile, 16.

"I have not ran outside the country but I ran for Bahrain and am looking forward to take part in my first major race in Uganda (world cross country)" said the ever jovial Mutile who clocked 41:11 mini test.

Jane Mwikali came a distant second after stopping the timers at 43:45 while Anna Mwongeli and Christine Ndali completed the top four in a 43:51 and 46:49.

In other disciplines of the annual event that attracted participants from five counties, star studded Malex Technologies, a side consisting of some established names in Kenya volleyball like Jairus Bett of national league champions, Kenya Prisons won the men's title while MKS took the women's trophy. Malex beat Market Hib by straight setS (25-22,25_21,25-19) while Mbooni-Makueni-Sultqn (MKS) retained the women's title after finishing top in the round robin format.