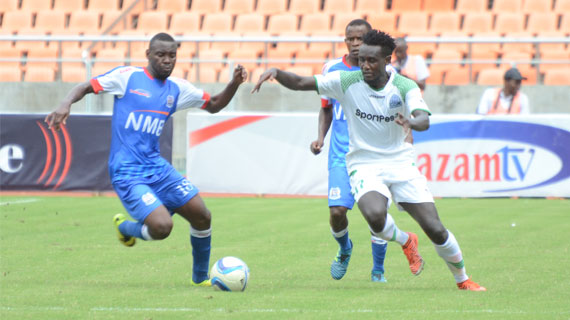 Just like they did in the final in 2015, CECAFA Kagame Cup defending champions Azam FC beat Kenya’s Gor Mahia 2-0 after extra time in the semi-finals on Wednesday afternoon in Dar es Salaam to progress to Friday’s final.

After 90 minutes with both teams tied at 0-0, the game had to go the extra 30 minutes and Azam showed their strength and resilience with Ditrim Nchimbi and Bruce Kangwa scoring the goals in a space of 10 minutes to send Azam to the final.

With Gor playing their seventh game in less than two weeks, the jaded legs were visible from the first whistle as they did not employ their fast paced football, limiting their chances of venturing into the Azam half for goals.

George Odhiambo had the game’s first chance after quarter of an hour bu his shot from distance was well collected by the Azam keeper.

In the second half, the home side injected come pace into the game seeing to break the deadlock and Mudathir Yahya came close after 65 minute but his shot was collected by Boniface Oluoch. The keeper was called into action again minutes later, blocking Ramadhan Singano’s shot from inside the box.

With nothing to separate the two sides in 90 minutes the game went into extra time and Azam proved to be the stronger, when Nchimbi made it 1-0 just three minutes after the restart with a rasping shot from outside the area.

Kangwa then put the icing on the cake eight minutes later with a finish from the near post after racing away on the right.